First visit to Austria through Graz and its Advent market!

I've only dreamed of going to Austria since I was 12 or so, not that long really... ;o) So I was extra excited when a work meeting got organized in the city of Graz in Austria and I realized I'd finally get to make that trip! Not much time to visit (too much work, needed back at the office), but at least I'd get a glimpse of Graz (plus a day in Vienna!).

2 full work days in Graz, and all I was able to visit was the Adventmaerkte (Advent Market) in front of City Hall on our way out to dinner one night! But that's ok, it was a nice long walk to get to it from our hotel, and another walk to our dinner spot... enough for me to see that Graz is a city worth visiting at some future point (corroborated by photos shared by a colleague who arrived a day before and got to spend it visiting properly).

Read more »
Posted by CrazyCris at 7:38 PM 2 comments: Links to this post

Christmassy travels: delightful Christmas ambiance in the markets of Austria and Germany

Three years ago I went all out Christmas on both blogs, and posted here a series on the various Christmas markets I'd visited in Belgium (Liège and Brussels), the Netherlands (Maastricht) and of course Germany (Aachen and Cologne). There's really something magical about those markets... a concentrated dose of Christmas cheer, plus great food and drink! They're a great place to hang out with friends when it's in your own city, and they're fun to visit and do some of your holiday shopping (when visiting some of the really nice ones). And boy do I miss them!!! Each year, when December rolls in, I get all nostalgic for the northern European Christmas Markets... Alicante is a great place to live, but when it's still around 20ºC and not much in the way of decoration and holiday music... it doesn't feel much like you're leading up to Christmas! 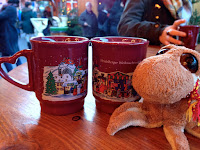 German Christmas markets are usually considered the best, so this year I wanted to take advantage of a 4 day December weekend in Spain to head north and catch the ambiance while visiting some friends who are in their last month of a 3 1/2 year stay in Mainz. Since I've tried to organize a trip to visit them twice before, but something always got in the way, I didn't take any risks this time and bought the tickets back in September! Little did I know back then that my job would be sending me to Austria and Germany the week before that trip, right at the beginning of Advent and the Christmas market season...
And I think I might have a little nuts with all the Christmas markets and glühwein in those extended weekends!!! The proof:
Read more »
Posted by CrazyCris at 1:57 PM 4 comments: Links to this post

Admiring the National Emblem of Turkmenistan

So last week I was in Ashgabat, the capital of Turkmenistan, for a big Exhibition and Conference on Education and Sports. I was very lucky to be able to participate as it's very difficult to get a visa to for Turkmenistan. It was a very interesting trip, and hopefully won't be my last!

But more on the actual trip another time. I want to write about something I couldn't keep my eyes off while I was there: the National Emblem of Turkmenistan. 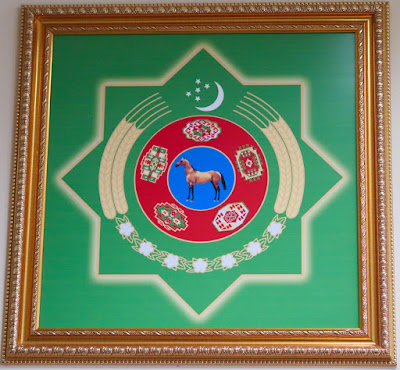 Almost everywhere I went, the main auditorium of the Exhibition Hall, various auditoriums or meeting rooms in a couple of universities, the hotel, the airport... there it was, right in from of me. Together with a photo of the President. When more than half the talks you're listening to are in Russian or Turkmen, and the translator isn't always doing a great job, you end up spending a lot of time observing your surroundings. And the more I looked at the Emblem, the more I was sure each element of it had to tell an interesting story. So I asked one of the other participants I met there, a Russian who's quite a expert on Turkmenistan (both subject of his research and has been there 5 times). So here goes (with complementary info courtesy of Wikipedia)! 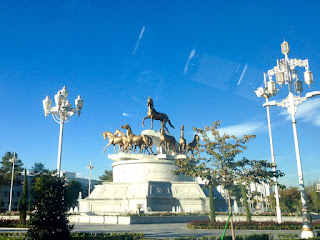 At the centre: a horse. More specifically an Akhal-Teke horse (apparently it's the previous president's horse Yanardag, born in the Spring after Independence from the USSR in 1991), a breed very important to the once tribal people of Turkmenistan who depended on them for survival (it's now their national animal - by the way: no horse meat on the  menu in Turkmenistan, unlike the other Central Asian countries!). There's a magnificent statue to these horses in town, of which I only got a quick "drive by" photo as I never had time to go back and properly wander around, camera in hand... Next time!

Read more »
Posted by CrazyCris at 9:29 PM 2 comments: Links to this post

Am I forgetting anything?

I'm pretty sure we've all asked ourselves that question once we've finished packing for a trip. Sometimes it's a little nagging voice in the back of the mind, just gnawing at you until the light bulb turns on and you go "Oh no! I forgot... Ahhh!!!" Or something along those lines. Sometimes you can solve it by finding a replacement on your trip. Sometimes you can't. And then there are the things you should definitely try to never forget when you travel.

Of course there are plenty of tricks to help you not forget things. I have friends who pack the week before a trip. My father is the king of packers. He's ready the day before, has everything he needs and his suitcase is a wonder to see! (He could be a champion at Tetris if he played.) I myself am a last minute packer which usually means chaos. I prefer morning flights to afternoon flights because if need be I have aaaall night to pack (won't go to bed 'til I'm done), whereas with an afternoon flight I have that added stress of "OMG! Taxi's coming in 15' and I still haven't finished this and this and this!". Yes I know, I should probably be better organized. When cows fly. I do try to write up a list beforehand of what I should include. Or at least I used to. But as it's always the same stuff and it's burned in my brain (a) I rarely finish the list nowadays, and (b) I usually forget to check it when packing! :p
Read more »
Posted by CrazyCris at 9:20 PM 5 comments: Links to this post

Enjoying Alicante and the Mediterranean, when I'm not off crisscrossing the globe for work. ;o)
View Larger Map