When the name Belgium comes up, what are the first thoughts that cross your mind?
Go on. Think about it. Write them down on a scrap of paper next to your computer. I'll wait...
...
...
...
Then write them in the comments section on this post, I'm quite curious about them!

When I first came to Belgium in September 1999 all I knew about the place was that they made my favourite chocolate (at the time): Côte d'Or Double Lait. 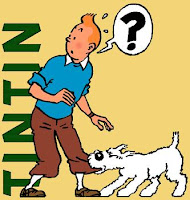 That French Fries should be called Belgian Fries.
That Tintin was Belgian.
And that Cesar thought the Belgians the bravest of the Gauls -much to Asterix and Obelix's chagrin!

I also knew they spoke 2 different languages thanks to having had a Belgian friend in Junior High who spoke French, while my sister's best friend in Primary School was a Belgian from Antwerp who spoke Flemish (I still remember my surprise when I learnt she didn't speak French: "but you're Belgian!!!???!!!").

I knew the French told lots of lame jokes about the Belgians. I knew Germany had invaded Belgium in both World Wars. I knew Brussels was the capital of the European Union and that together with the Netherlands and Luxemburg (a trio of nations known as the BeNeLux) they had been among the founding members of the first organisations that led down the path to the E.U. I knew most of what is currently Belgium (along with the Netherlands) had once been a part of the Spanish Empire. I knew the city of Liège had been sacked at some point during the Renaissance by I don't remember by whom because I read about it in Sir Walter Scott's novel Quentin Durward as a teenager. And I think that's about it. Not bad now that I actually stop to remember/think about it!
That was 11 years ago. I came to Liège on a 10-month Erasmus scholarship (student exchange program between European universities), and ended up staying just over 8 years (give or take a few months out of the country)! Then I came back for 4 months in the Fall of 2009, and here I am again in the Fall of 2010. I can't seem to get away from here! Something keeps drawing me back!!! It's not the weather, that's for sure! The only time you can be pretty much guaranteed decent weather is in September and October. May and June can be ok as well. The rest of the year is pretty much a lottery. In the winter it can be cold and damp or freezing and dry. In the summer it can blistering hot (up to 35ºC) or cold (15ºC), grey and rainy! Cold and rainy is depressing in the summer... but when it gets up to 35ºC you've got no way to cool down! No A.C. any place, no outdoor public pools... At least not in Liège which is where I live(d).
No, what kept me here were the educational and research opportunites, the friends I made (both local and international), the cultural life (there's an Opera in Liège! a Philharmonic Orchestra! an independant cinema that shows films from all over the world in their original language!), the festivities when they take place (Liège is great for the Fiesta!), the food... and the fact that being such a small country the public transportation to move around the country is fabulous (when not on strike, argh!) and it's close to so many other interesting places to visit! London, Paris and Amsterdam are only a few hours away by high-speed train! And you can travel cheaply between Belgian cities if you buy a RailPass which is a 10-ride ticket for 74€ (so only 7.4€/ride) which is good for a year, can be shared amongst friends, and has a cheaper option for those under 26 (GoPass, 54€).

What has brought me back, both times, has been a great job opportunity: teaching scientific English in the University of Liège. It's a job that allows me to improve my teaching skills, communicate the importance of knowing English in the international scientific community, interact with fun university students who have some quirky senses of humour, and still keep a foot in my original field: science! I'm a good teacher, and for the most part I'm pretty sure my students appreciate me and my work, so it's very rewarding! Plus I get to spend the most interesting season in Liège: the Fall!
When the trees go all technicolour, there's plenty of ambiance downtown thanks to the Foire d'Octobre and the Comités de Baptêmes for the university students, the Opera starts up again and then in Christmas there are all the festivities for Saint Nicolas, Christmas etc. (and it's usually the driest season of the year).
I'm going to leave it at that for now. This post has gone on long enough. :p
What's up next? Well at some point I'll share some interesting and/or confusing factoids about Belgium. I'll take you along with me whenever I go visiting a place on my "can't believe I still haven't been there!" list. And I'll fill in the blanks with posts about the rest of the country (major cities, villages, countryside etc.), depending on what inspires me in my iPhoto library. Expect a very close look into Liège -since I'm living here!-, a city not usually on the tourist circuit, but which has its hidden charms (and its not so hidden ones), particularly when the clouds go away and the sun shines through a clear blue sky.
Bienvenus en Belgique!

Welkom in Belgïe!
Posted by CrazyCris at 5:48 PM