Why London, why now?

Why London? That's easy! My sister lives just outside of the city so I get the double pleasure of hanging out with her, plus continuing my ongoing exploration of the British capital! :o)

So, how come I get to take a nice long weekend to come to London? 4 days off work just because???
Nope! In Belgium (and France) November 11th is a holiday! It's Armistice Day, commemorating the end of World War I in 1918. I was surprised it wasn't a holiday in England, considering World War I is still called "The Great War" and all that... but it turns out even though they don't take a day off, they still commemorate it as Remembrance Day, sometimes called "Poppy Day" 'cause everyone wears red poppies to honour those fallen in the line of duty (in various wars, not just WWI).
You can find people spread out across the city (all week my sister says!), exchanging these poppies for a few coins. 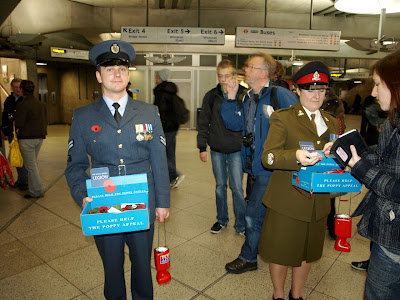 My grandfather served in WWII, but he died before I was born, so I've never talked to anyone who served in a war. I look forward to some future when they will no longer take place. I may be naïve, but I have hope in humanity that that day will come. In the mean time, here's to those who serve(d) and died fighting to defend their countries! 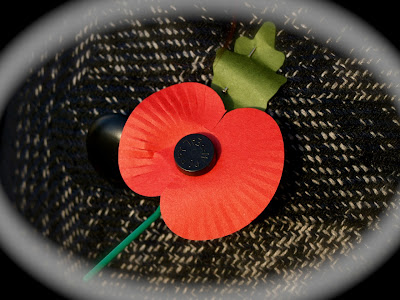