Oops! Almost two months since my previous post... and I wanted to write one a week to be sure to have the sailing trip finished by the end of summer! Let's just say I've been a little bit distracted by visitors, summer activities and by all the Olympic excitement! :p

In the previous post we had just left Poros en route to Spetses via Dokos, starting our 2nd day of Saronic Sailing. And sailing we did! Was kind of exciting to finally see Vassilis unfurl the main sail and the genoa! :o) 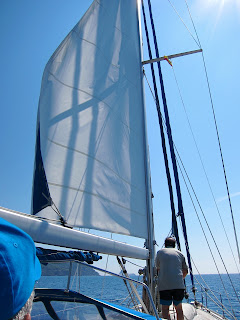 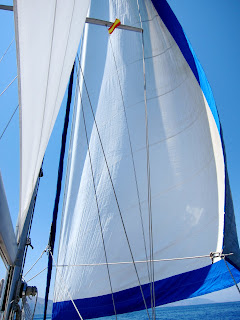 After a couple of hours sailing we arrived at the small uninhabited (except by goats and a few herders) island of Dokos. I'll tell you more about it in the next post (we returned to spend a night).


We weighed anchor in a protected bay, and while Lorella was preparing lunch... we jumped overboard! :p 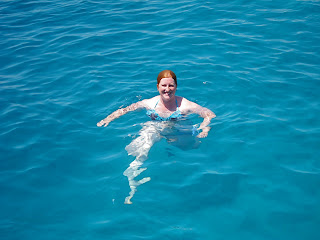 FABULOUS swim! The water was gorgeous, just a tad bit chilly when you first jumped in, but it warmed up after a couple minutes swimming 'round the San Giorgio! Opened up the appetite too! ;o)


After a couple of hours of swimming/eating/swimming, we set out again for Spetses, just over an hour's sail away (and right in front of us in this next shot).


We rounded the point marked by a lighthouse, 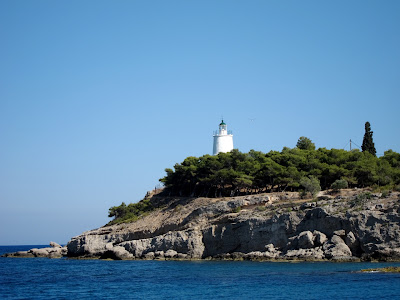 and guarded (against the Turks, pirates...) by a battery of old cannons. 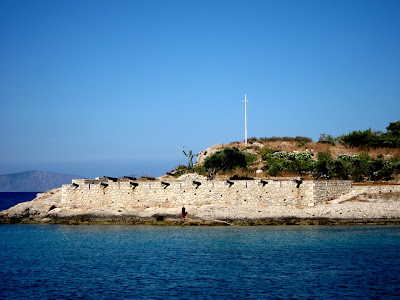 Then made our way into Spetses' old harbour. 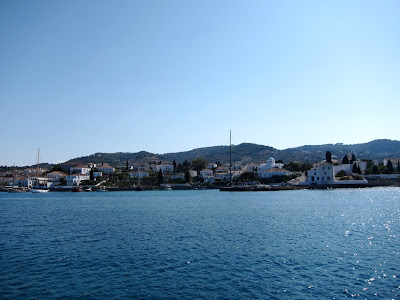 Spetses is a small island of approximately 4000 inhabitants that's only a few kilometers away from the Peloponnese Peninsula, and whose main source of prosperity was it naval industry. Spetses' captains broke a British blockade during the Napoleonic wars and later rearmed their ships to join the Greek fleet during the War of Independence against Turkey! And here we finally understood why our captains wanted to make sure we made it to whichever harbour we are going to spend the night in early... because otherwise we might not find any room for our boats! There are no marinas on these islands where you can reserve a slip in advance. Just old harbours with a limited amount of space where boats can dock. Everyone else has to either stay in the middle of a bay (thanks to the anchor), or moor attached to another boat and climb over it to the dock! In this case we (the San Giorgio) got the last spot available, although it was an awkward mooring (made more complicated by the paranoid "don't scratch my paint" captain of the ship we were mooring next to!). 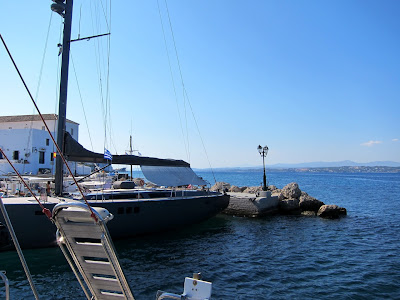 The Stressbuster had to latch onto us and then throw a rope to the rocks at the end of the dock (and that lamppost)! To get to land they had to first climb over to the San Giorgio and then make their way across our bouncing gangway which was set just on the corner... kind of scary-fun! ;o) 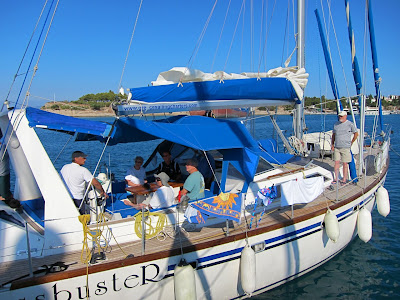 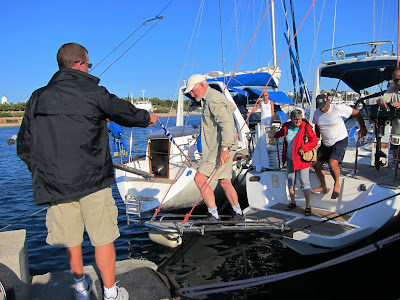 Once on shore we headed walked into town on a road that went along tall walls protecting many houses from storms and the sea. We kept crossing horse-drawn buggies coming and going, it's apparently one of the "things to do" in Spetses! (some chose to go for a ride the next morning) 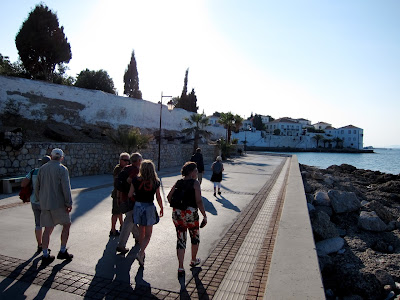 Another strategically-placed set of canons... always good for a bit of goofing-off while waiting for the slow-pokes others to catch up! :p


Day two of this trip and I've already discovered that properly visiting these islands is going to be a problem because of scheduling! A proper visit would have required double the time (so spending 2 nights per island). By the time we dock most places to visit (museums etc.) are closed! Sure lots of stores are open (tourism!), but I'm not a big shopper... Nope, I prefer to sit down for a bit in a café like this one: 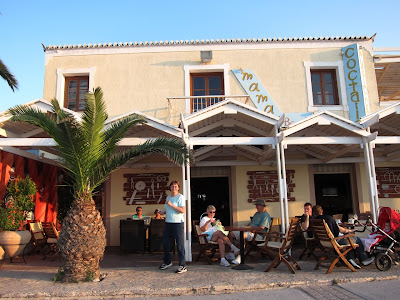 and look out at this view: 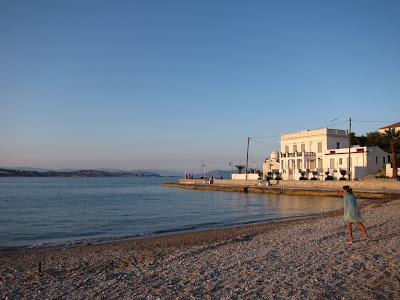 Pretty, huh? The lighting is always nicer in the summer evening sun. Several of us stayed at Café Mama for a bit (great mojito!), enjoying the view... and the WiFi! ;o) Others came and went... at one point there were a bunch of ol'fogies (plus me) lined up on the beach wall! Happy campers, ready to look for a place to eat! 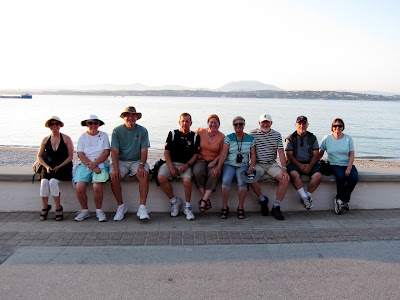 Most of the houses on Spetses are located near the harbours because the island doesn't have any fresh water and it all has to be brought in by boat from the mainland. This means a large portion of the island is delightfully empty, with supposedly some lovely coves! Unfortunately NO TIME! So I just  wandered around the main part of town for a bit, admiring the pebble-mosaics on the ground that Spetses is famous for: 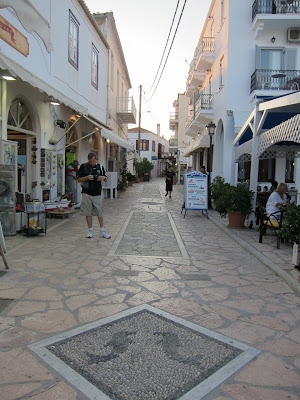 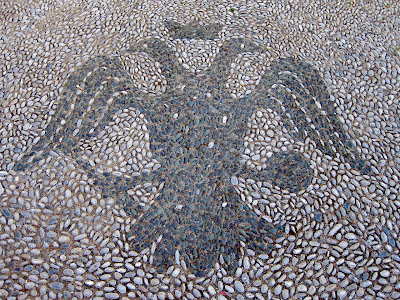 The new harbour was full of water taxis, either resting after a hard day's work, or ready to take clients out to another part of the island (need more time!). 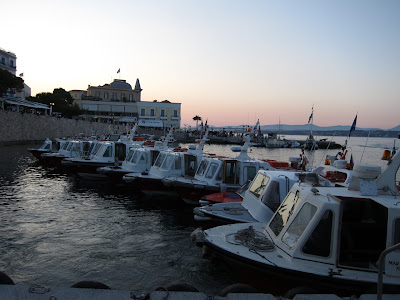 Walking back to where I'd left the others, I stopped to admire the almost-full moon rising in the sky... 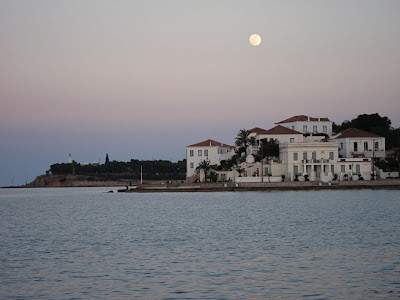 After dinner, and on our way back to the boat, we were surprised to see a light blazing across the water: 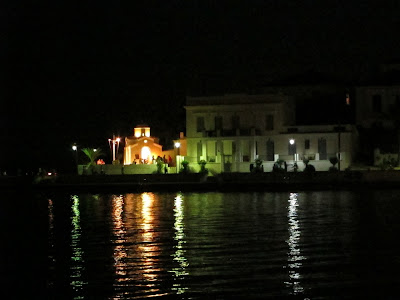 It was the small church we'd walked by on our way into town. Closed then, but wide open now! 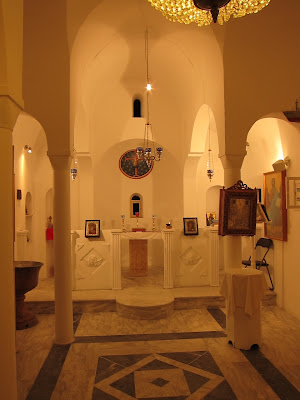 Early to bed, early to rise. Next morning we had until lunchtime to enjoy Spetses and I decided on walking around the old harbour to the lighthouse instead of going back into town for some sight-seeing. This means I missed out on the Museum-house of the famous Bouboulina (a woman who fought and dedicated her money and fleet of ships -and captained one of them!- in the war of independence against the Turks in the early 19th century), but it was such a lovely day I just wanted to lose myself in nature for a bit... and enjoy the peace and calm of not being on a boat with lots of talkative people! :p 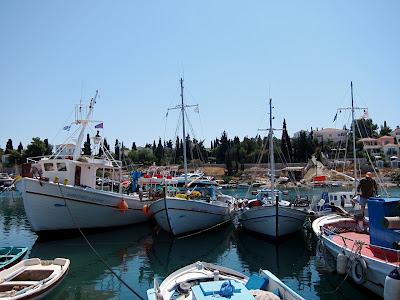 The harbour was full of fishing boats, and many fishermen were on the docks stretching out their nets to dry and I guess clean and/or repair. 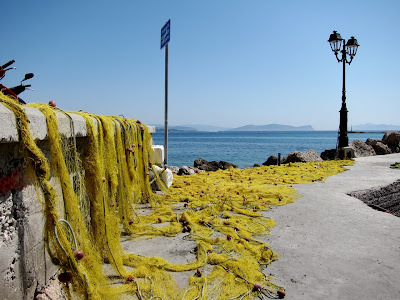 Walking around the harbour was simple enough to navigate, and there are so few houses on that side of the island that I found myself on the coast facing Dokos and Hydra fairly quickly:


The walk around the lighthouse was lovely, with views of the Peloponnese Peninsula on the horizon. 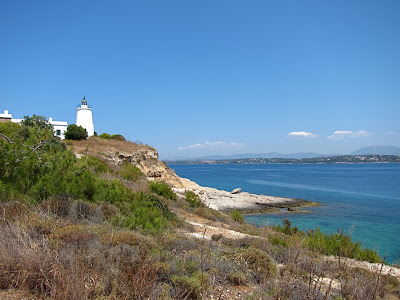 And some lovely wildflowers: 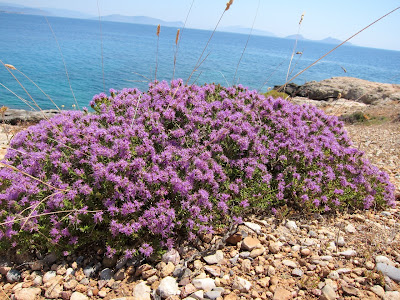 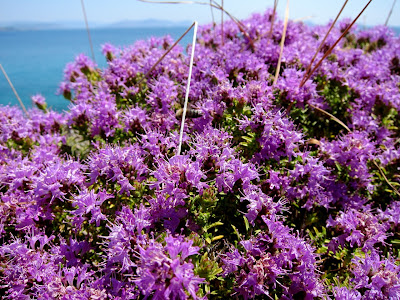 At one point I got a nice shot of the San Giorgio and Stressbuster through the trees docked at the other side of the harbour! :o) 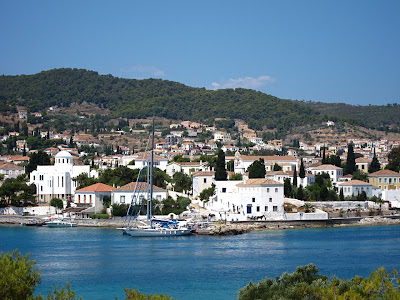 And voilà! Couple of hours wandering around, and then back onboard the San Giorgio to enjoy another of Lorella's delicious meals just before we headed out to Dokos. 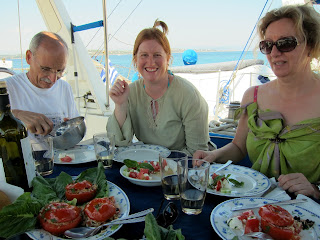 Next: relaxing on uninhabited Dokos! Snorkelling, bbq, stone-age ruins and a short hike! But might take a bit as there's some video editing involved...
Posted by CrazyCris at 9:21 PM