Dokos: water, rocks and a bbq on Saronic Sailing Day 3!

So when I asked if I should continue with Greece or table it for a while and move on to Granada at New Year's, I got votes for both destinations and a suggestion that I just alternate between the two! So I've decided I'm going to that, and start off with Greece just to start reminding myself about the trip since it was now 7 months ago! :o(

So, when I left off back in October (yikes!) we were enjoying the island of Spetses. We left Spetses right after lunch on our third day in the Saronic Islands and had a delightful 2+h sail to neighbouring Dokos (where we had stopped for lunch the day before en-route to Spetses from Poros).

Dokos. Hmmm... when I look it up in the two guidebooks sitting on the shelf next to me (Guide du Routard and Lonely Planet), Dokos doesn't appear in either of them! Not only does it not have a section of its own under the "Saronic Islands", but it doesn't even appear in the index! In fact, you have to know it's there to spot it on the map of the Saronic Islands! Even on Wikipedia it's barely got a couple of paragraphs... Why so little love? Well, it probably has to do with the fact that it's an uninhabited island (except by some goats and a shepherd or two) so none of the tourist boats take you there (you can hire a water taxi from Hydra). It's a pity 'cause the coves are great for swimming and there was some nice hiking up the mountain looking for old ruins! Those ruins are a sign that once upon a time it was inhabited (between 3000 - 5000 years ago), and even housed a Byzantine castle (good lookout spot) whose remains I didn't get a chance to go looking for. 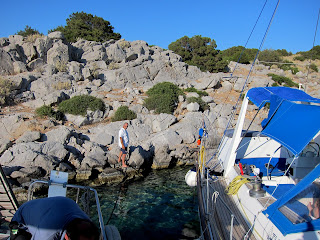 We arrived in Dokos around 6 p.m. and went to a teeny-tiny bay just behind the one where we had had lunch the day before. Non-inhabited island, so no docks! This meant Kostas and Vassilis had to moor our boats to the rocks on the coast so we would be able to get off the boat (with relative ease) to go walk around the island (anchoring in the cove would have meant putting out a dinghy, less flexibility!). As you can see here, it wasn't an easy matter! In the end the Stressbuster got to be the one moored closest to shore, so we had to climb over to her and then onto land. But I'm getting ahead of myself! We're in this beautiful cove, with transparent waters so flat it seems like a lake and not the sea... the sun hasn't gone down yet... who wants to go on land?!?!?! It's in the WATER for me!!! And quickly please! The water isn't that warm, and once the sun goes down getting out will be quite chilly... So no need to worry about preparing the housing to get my camera in the water, right? I mean, there's very little light... probably not much to see... let's just go for a swim and enjoy it. ARGH!!! I should have prepped my camera! The water was crystal clear and although not very diverse I did some some very interesting critters down there, namely "fire worms" which I had only seen once before diving in Cabrera! *sigh* Oh well. At least I spent some time helping a couple other people out by giving them a brief snorkelling lesson and pointing out a few interesting things. Then I spent close to an hour snorkelling around the cove and just taking it all in! 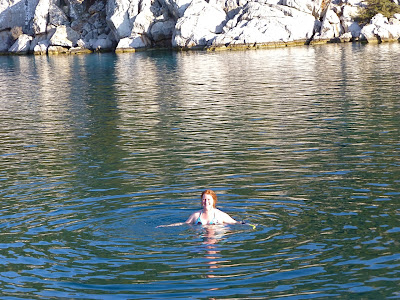 So I couldn't take any photos underwater, but I did bring up these treasures to share with my fellow travellers: 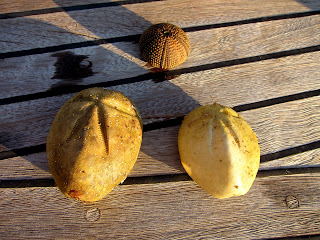 Speaking of sea urchins... when I finally set foot on solid ground... instead of heading off to explore straightaway, I ended up spending about half an hour trying not to fall in the water! 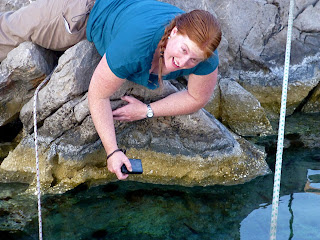 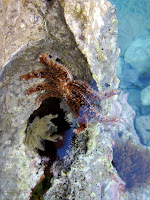 Allow me to explain... I don't remember exactly why -this was 6 months ago after all- but I found myself peering into the water, watching a very active starfish just below the surface who was wandering around trying to decide which sea urchin would be its evening meal! What's that? Well of course I got some photos and video for you!!! (and this is one of the reasons this post got delayed last Fall... I couldn't find time to edit the video footage properly and reduce it to a reasonable length! I didn't think you wanted 20' of starfish vs sea urchin!) Here goes:

As you can imagine... leaning over that rock was NOT the most comfortable position! So When the starfish seemed to give up, so did I and finally headed up to explore the area a bit. And I was delighted to find myself walking among some 3000+ year-old ruins!!! Kostas told us a bit about them, age etc. Sadly I forgot to take notes so I don't remember anything other than their age! :o(  But still, it's quite impressive when you're standing in the middle of them... 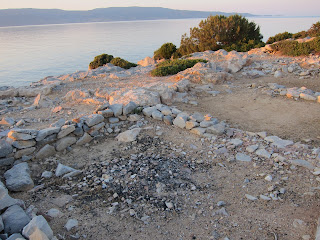 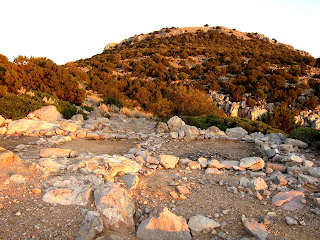 Those aren't the only ruins on the island. Other than the Byzantine castle I mentioned earlier (which I didn't know about at the time), on the top of the hill you can see in the photos of these ruins there were also some remains (only a few centuries old this time) of houses, walls, animal pens... AND, see this photo of the cove with our two sailboats? 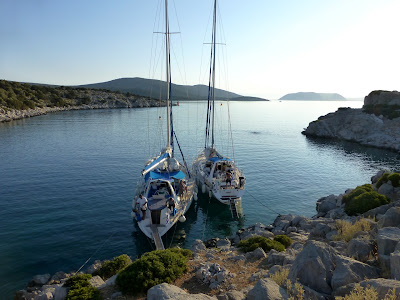 Well just beyond the point on the right, there's apparently the oldest underwater shipwreck discovery known to archaeologists!!! Sadly too deep (and late) to see it by snorkelling (about 30m, so ~100ft), otherwise you can bet I would have been all over that! You can find out more about the 4000 year-old shipwreck at this Wikipedia link. Kostas thought we'd be able to see the artefacts the next day in the Hydra History museum, but we discovered when we got there that they were all in the Spetses museum! Drat! (apparently there's an argument between the two as to whom should get to keep the artefacts)

So it was too late to do any more wandering around the island, but it was a perfect time to either join some of the others in meditation, or simply sit and admire the sunset over the Peloponnese Peninsula... 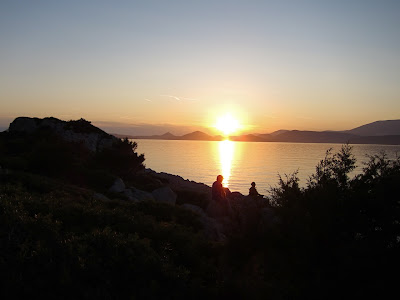 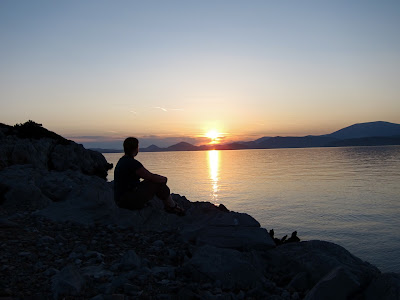 That or join the party crowd on the Stressbuster and enjoy some beer or wine and sing funny songs! :p


This was the only night we had dinner on the boat (as there was obviously no place else to eat!), and Kostas lit up a barbecue so we could enjoy some fantastic lamb and other meats! Miam! Here's the whole gang from the San Giorgio digging in, with Vassilis and Lorella hiding in the shadows back there! :p 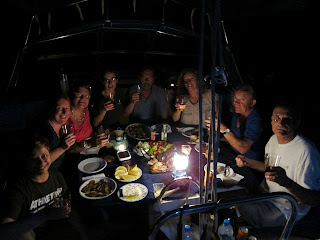 Next morning we were supposed to leave bright and early (9 a.m. I think) for Hydra so we could be sure to find mooring (more on that issue next post), but there was no way I was going to leave without getting the chance to explore Dokos a bit more! So, crazy me, I got myself up at 7 a.m. and met up with Ron (one of our Florida cousins) to climb the hill and find those other ruins! 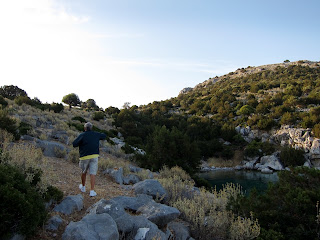 All the way up we were rewarded with lovely views in the early morning light that made it all even more magical... 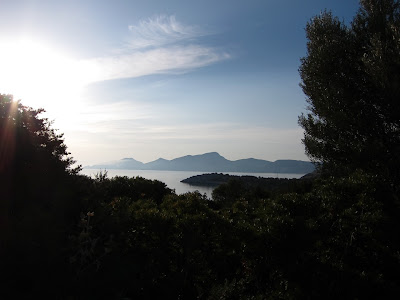 About halfway up we came across the first remains of some kind of enclosure. 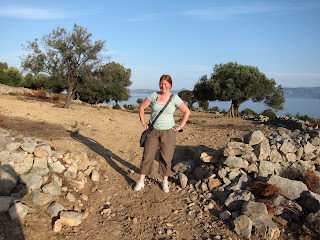 That was the "easy" part of the hike. After that it was pretty much straight up through the brush (paths? only if you're a goat!) to the peak which we could see above us. 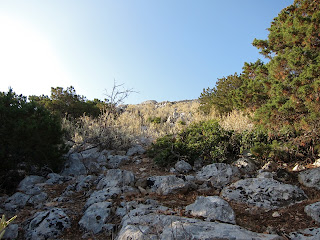 Of course the higher we climbed the smaller our two boats got beneath us! 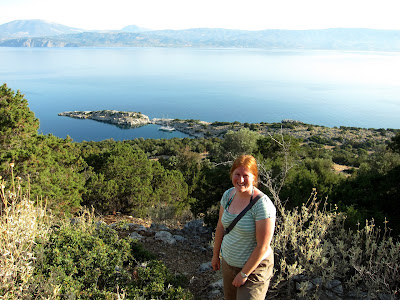 Woah! Check out this view (sorry for the poor stitching) across towards the Peloponnese Peninsula!!!

The only time I'm ever happy to get up so bloody early is to do this! Hiking (or scuba diving). :p 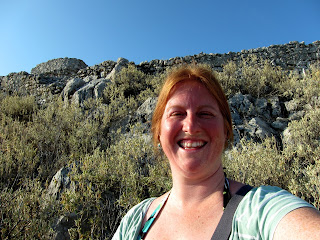 Almost up! Careful with those rocks Ron!!! 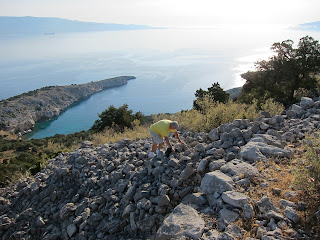 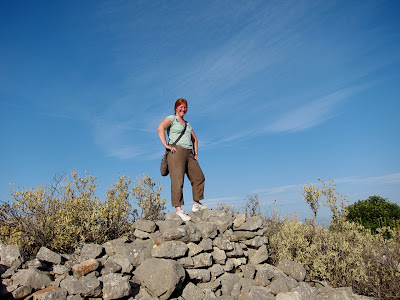 Drat! The hills on the other side of the bay (where we had lunch the other day) are even higher! *sigh* Will have to leave those for some future visit... :p 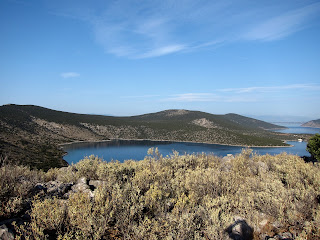 Time to head back down if we don't want to make everyone late! The climb took longer than Kostas told us it would... 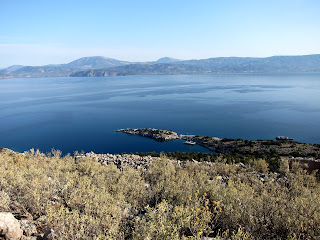 Problem with going down is that you don't always have your objective so clearly in view... Ron and I had to fight through some of this brush... and ended up coming out too far above our boats at the opposite side of the cove with no way of walking around! So we had to backtrack and find another way down! 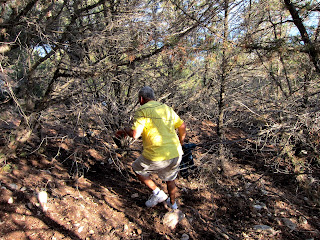 But in the end we made it safely! Sadly with not enough time for me to jump in for a swim as I had intended (you might have noticed I was wearing my bikini in those shots). 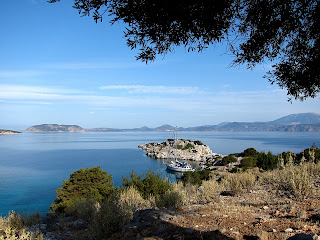 So I just got a quick shower off the back of the boat and stretched out to dry on deck as we motored across to Hydra... 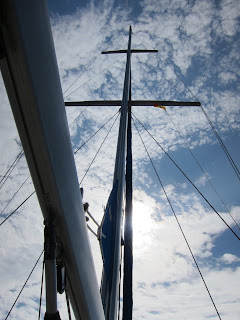 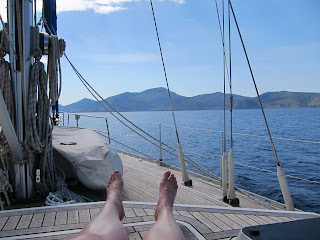 enjoying the fascinating skies above me!

Next Saronic Sailing post: Hydra! But probably a brief interlude on the New Year's trip to Granada first... ;o)
Posted by CrazyCris at 9:23 PM