So for my final day in London I had decided on heading back to Westminster, hoping to get a clearer shot of the Houses of Parliament (i.e. in the morning so with the sun behind me and not behind the building!) and then go visit Westminster Abbey and finally head over to St Paul's Cathedral. Well I ended up heading late into town (had to be telephone support for a couple of hours for my sister's friend who was flying out of Heathrow to teach Spanish in Indiana for a year, and was having some ticket troubles, as in "we're sorry you aren't anywhere in our list of passengers"), fortunately for me the sun was still at an o.k. angle for the photo I wanted to take: 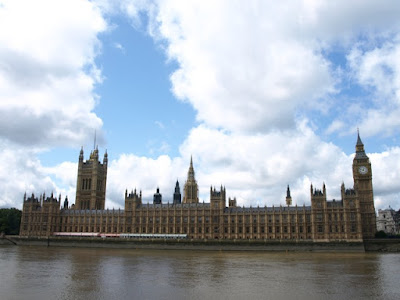 After which I crossed the river yet again (is it me or does that water look murkier than before?) and just wandered around the building taking in all the details. Or at least as much as guys like these would let me: 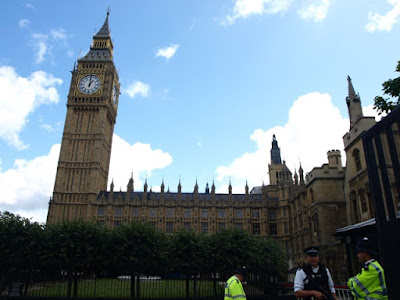 grrrr... I wanted to go wandering inside! :p

Anyhow, so I continued walking around the outside and came across mister Oliver Cromwell looking down on the local traffic: 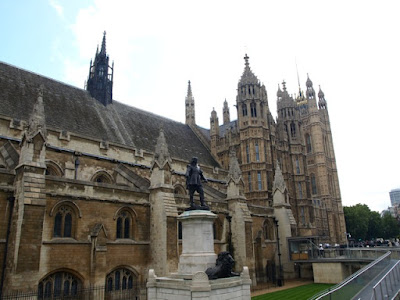 and yet another entrance they wouldn't let me through: 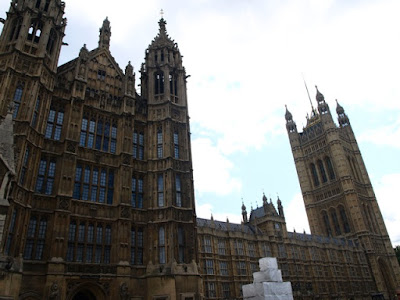 Perhaps I'll have better luck with this one? (is the the other "tall" tower at the opposite end of Big Ben's tower) 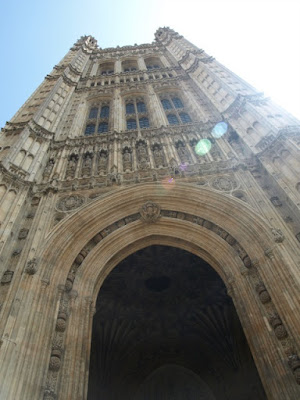 Oops! I guess this one is for the use of a single individual: 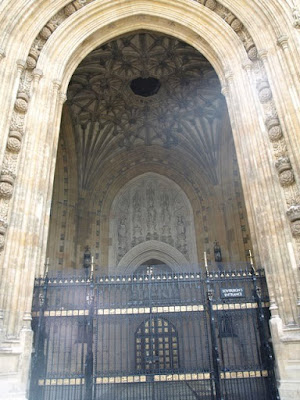 and since I'm not QE2 I guess I'll have to satisfy my curiousity with admiring all the carved little details.

Here's a peek around the tower's corner: 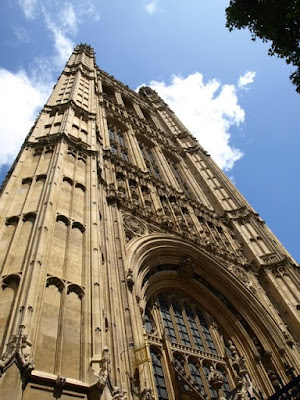 with I'm guessing previous Kings looking out across the land 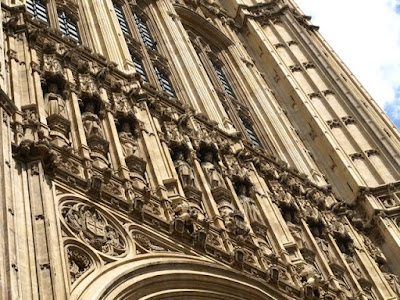 lol I looooove the details! 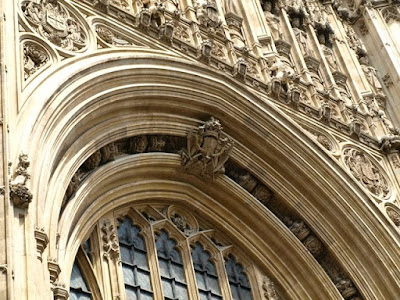 and my zoom lens: 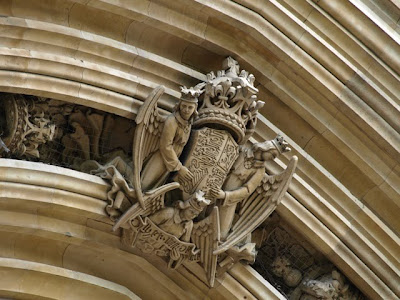 I must say though these two fellahs watching over the gate were my favourites! 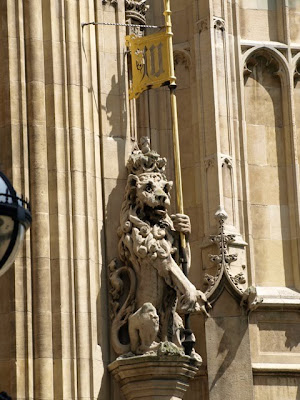 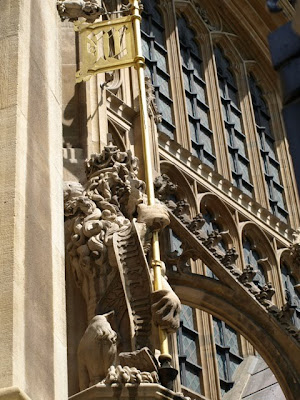 Can you make out the royal motto on the second? "Dieu et mon Droit"

What luck I had (as usual) with the weather! When I caught the train into town it was raining... when I reached Westminster I was greeted by skies like these: 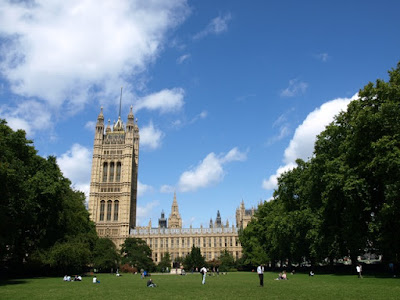 So after wandering around the Houses of Parliament as much as allowed, and after having satisfied the rumblings of my stomach, I figured it was time to peek into one place I knew I could go into: Westminster Abbey! Here's a glimpse of the back as seen from the Sovereign's Entrance of Parliament: 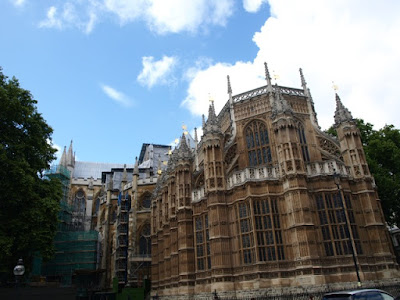 Impressive! Although the façade is even lovlier: 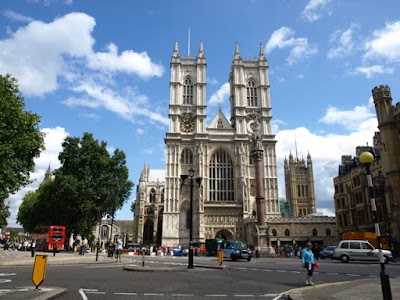 reaching up towards the heavens! But as that turned out to be the exit, I had to make my way around the side tourist entrance. 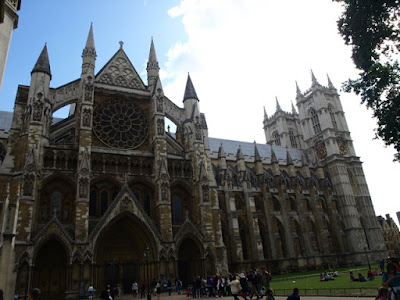 Admiring the rose? It was even lovelier from the inside with the sunlight shining through! If only I had a picture... 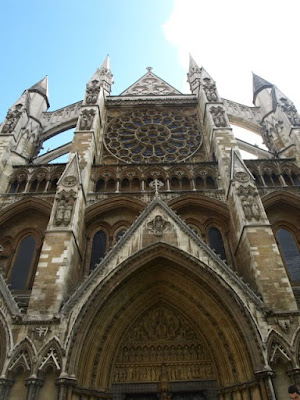 Once again admiring all the details... I am so in love with Gothic Churches! I could spend hours upon hours gazing upon this bit and that bit and... 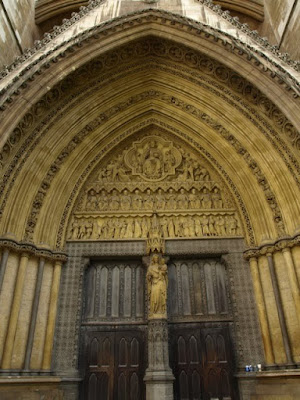 So, big tourist attraction, right? So you have to pay to get in... well if you do then add on a couple of quid for the Verger's Tour! 90' with someone narrating the history of the Abbey to you and taking you through roped off places normally off-limits (like Edward the Confessor's Chapel). I particularly enjoyed seeing that Queens and sisters Elizabeth and Mary Tudor were buried together (separated by war, united in death), although Elizabeth is the one who got her effigy on the tombstone (courtesy of King James 1st, whose mother Mary Queen of Scots is buried in a neighbouring chapel). I was also moved by the tomb of the unkown soldier (the first of its kind)

Now, here's my big bone of contention with this place: NO PHOTOS ALLOWED! whaaaaat?! Even if without flash?! snif!!! That's torture!!! On the other hand the inside is so cluttered with tombstones, sculptures, windows, monuments... I could probably fill up my computer with images of it all! :p

I guess I'll just have to send you along to a virtual tour here, or the Abbey's highlights from their official website.

I can share a few snapshots of the Cloisters with you, no problems (other than the hour and diminishing light) there!

Here's the entrance/exit from the Church: 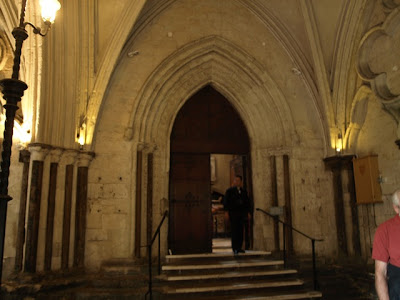 Beautiful work in those arches that look out in the garden: 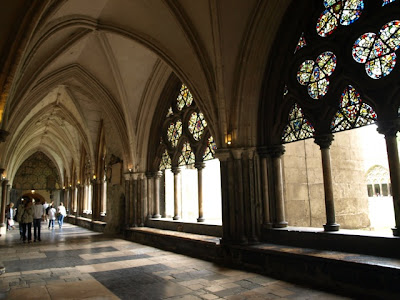 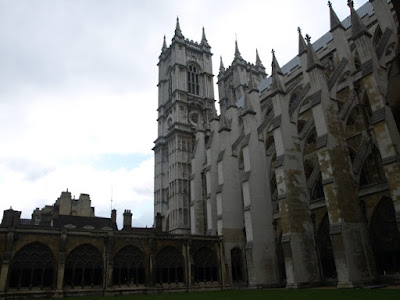 Zut! Once upon a time (in high school) I used to know the architectural terms (in French) for a Gothic Church... are those reinforcement structures the "arc-boutants"? 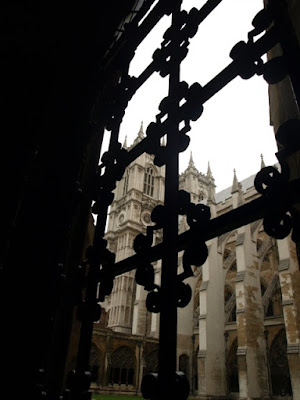 Entrance to a Chapel: 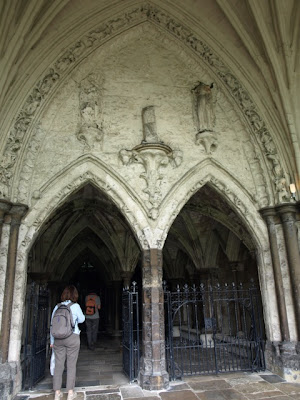 There weren't as many commemorative monuments as inside the Church, but here are a couple that particularly caught my attention: 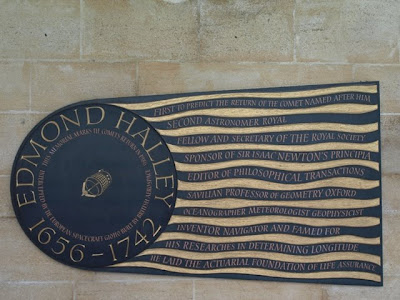 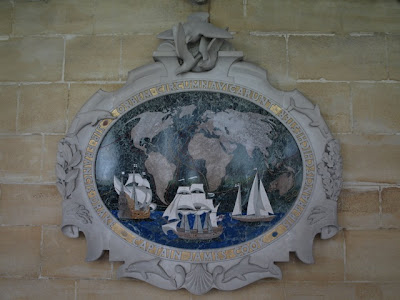 As an oceanographer and marine biologist how could I not appreciate that second one?! ;o)

And voilà! As we say in Spain "Colorín colorado, este cuento se ha terminado!" In other words, time's up, the story's over, time to go home! After spending 3h in the Abbey there was no time left to head over to St Paul's, will have to see that on my next visit!

Might as well say one last good-bye to this guy before I hop on the Tube (and head over to my favourite bookstores to load up on reading material): 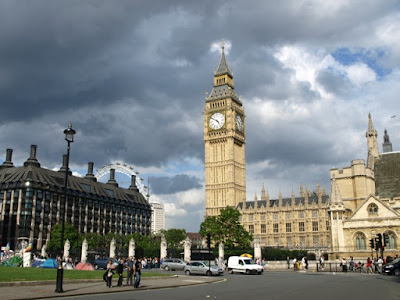 One last thing, my sister and I celebrated the end of the trip (courtesy of a parental gift) by catching a show: 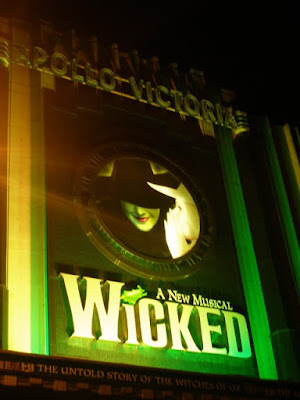 As my sister was fond of saying (repeatedly), "now that was a wicked show!", go see it! :o)

Hope you enjoyed the weekend in London!
Posted by CrazyCris at 10:07 AM