Ahhh... what a great way to start a trip! With a couple of days in one of New Zealand's best Marine Reserves right after Christmas. FA-BU-LOUS!!! :o)
The Poor Knights Marine Reserve was created in 1981 and was New Zealand's second Marine Reserve. It extends 800 metres offshore from the Poor Knights Islands, volcanic remnants which are located off the west coast of Northland (northernmost region of NZ), just off the harbour town of Tutukaka.
Since the water around these islands is sub-tropical (temperature in the water was 22ºC when I went in!) there are a lot of sub-tropical species of fish and invertebrates that you don't see elsewhere in New Zealand. Also, since the islands basically end in steep cliffs that dive down into the ocean (sometimes to 100m depth) there are plenty of vertical walls to explore for invertebrate species, isolated columns or underwater archways which are a lot of fun to play around!
We headed out of Tutukaka Harbour early in the morning, under a beautiful sky and no wind, and quickly surrounded by a pod of playful bottlenose dolphins who were entertaining the local kayakers! :o) 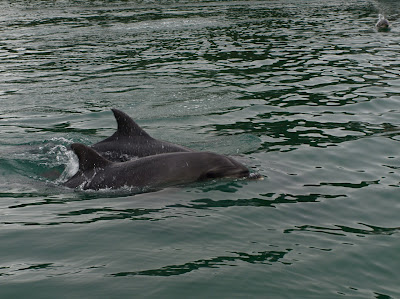 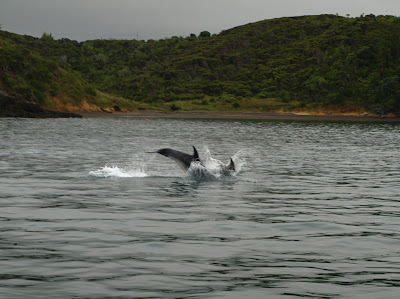 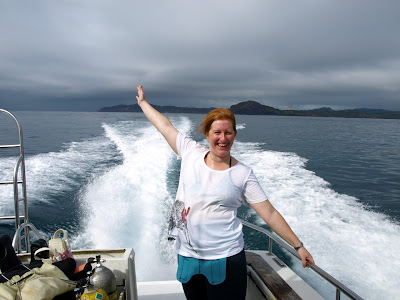 and towards the islands. 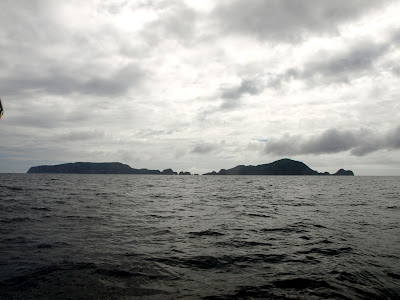 As you can see, the sea was flat as a pancake! HUGE improvement on my previous trip here with my sister 3 years ago. The sea was so rough then I got seasick even in the water and actually vomited underwater! Not a pleasant experience, although I was compensated by being immediately surrounded by fish! lol!
On this map from New Zealand's Department of Conservation you can see our two dive sites for the day: Northern Arch and Middle Arch on the NW coast: 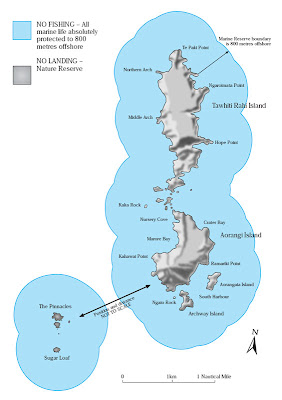 Northern Arch was both scary and fun!

It's considered a premium dive spot but very difficult because of the strong currents through the Arch and around the headland. In fact it was all I could do to keep myself within the arch long enough to shoot a photo of this fabulous sponge, 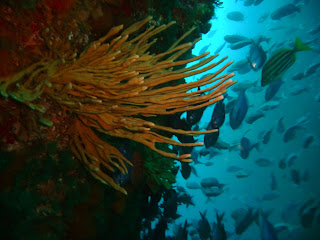 and this scary yellow moray eel! 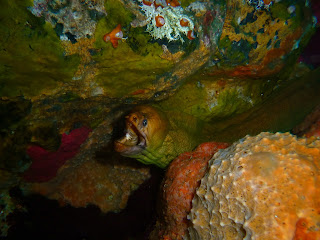 On the other side I found myself popping up through a beautiful green forest of stalked kelp: 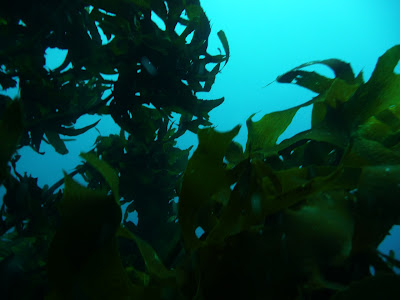 Peaking through the kelp to the rock hidden beneath was rewarding since I spotted (among many other critters) a camouflaged scorpion fish: 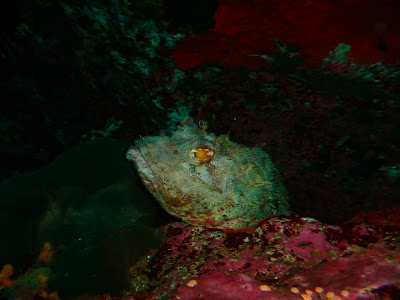 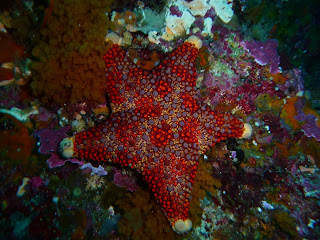 Even better was coming up out of the kelp at one point and practically bumping into this short-tailed stingray! lol! 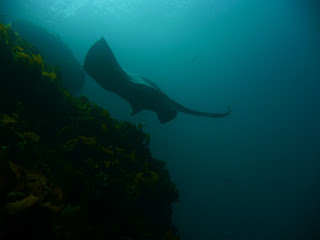 Was a short dive (1/2h) because my air ran out sooner than usual since it was such an effort fighting the current to get around the headland. In fact, I'm not sure I would have been able to make it around in a couple of points if I hadn't been pulling myself along with the help of the kelp! Now those are some sturdy stalks! ;o)


The second dive was at Middle Arch, 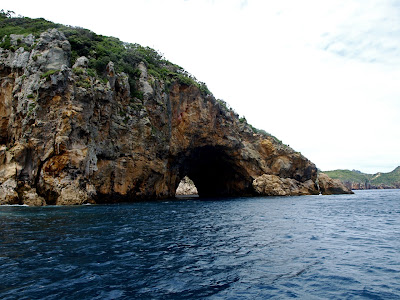 and since on this one I went down with my sister and her boyfriend (they were free-diving at the first spot), we mostly stayed under the arch so we could all practice our underwater macrophotography, or taking pictures of each other like this one my sister took of me at the entrance to the arch: 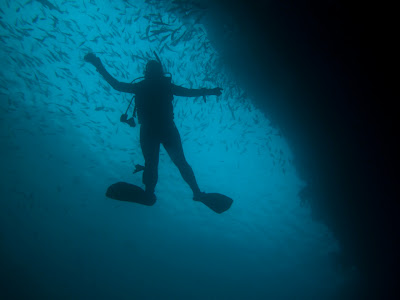 I enjoyed taking in all the details, like this school of fish following the archway up to the surface, 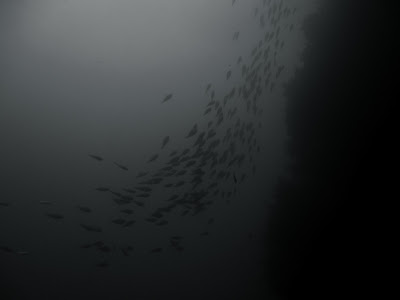 or this stalked kelp outlined in the blue waters: 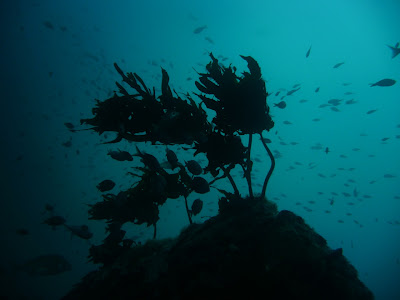 There were some gorgeous sponges and gorgonias like this one: 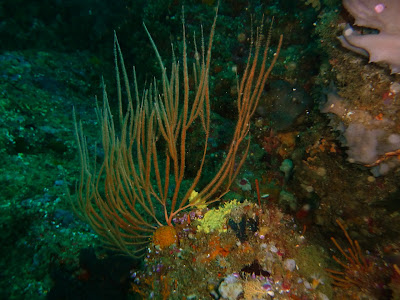 and a several more moray eels hiding amongst the rocks 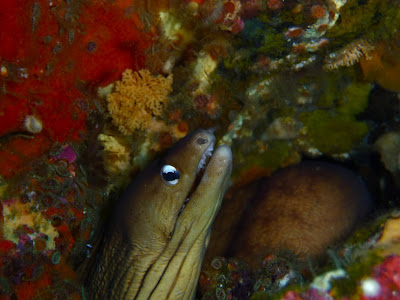 Also among the fishies, yummy (according to my sis) pink mao mao 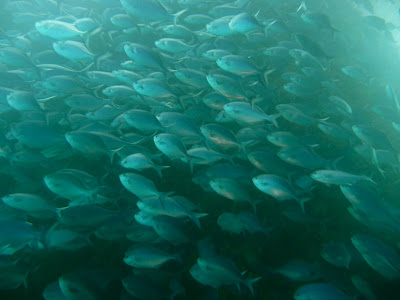 But the highlights were definitely all the small nudibranchs (small shell-less molluscs) we were searching for on rock and algae surface. Like this little (~5 cm?) clown nudibranch: 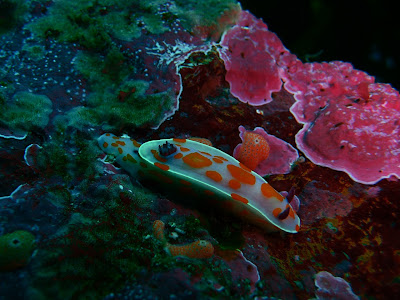 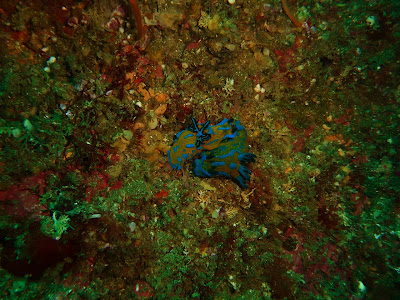 You can get a better idea of their size in these two pictures my sister took: 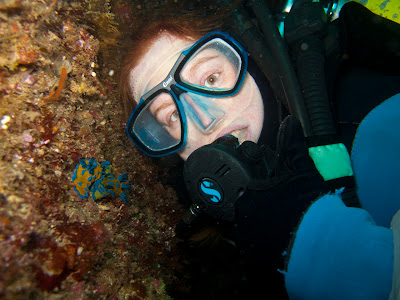 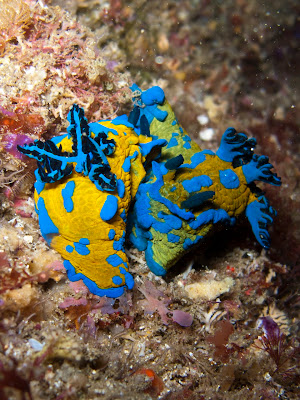 Then there was the fun of chasing after stingrays trying to get a decent photo, only got one, but it ain't half bad! ;o) 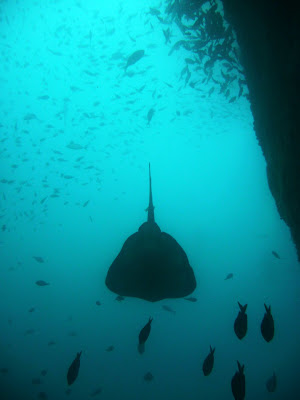 Almost as good (and lots of fun), following a trail of bubbles down the wall, into a little cave, and finding myself in an air bubble! 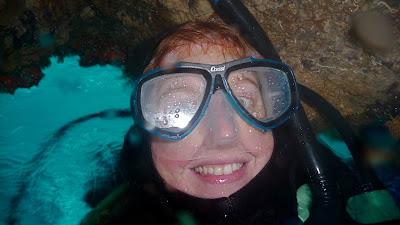 'Twas a fabulous day! Wish we could have gone again but the weather was against us the next day so we only went out in the afternoon along the coast for some free-diving and spear-fishing for the spearos...
I'll have to see if I can get another dive day in when I'm in the South Island! (if I can afford it, gulp!)