The capital of Spain has a green heart: El Parque del Buen Retiro.

El Retiro (as it's commonly known) has been around pretty much since Madrid was made capital of Spain by Philip II in the 16th century. He had the park of the Jeronimos monastery (set up by his great-grandmother Queen Isabel) enlarged and formal avenues with trees laid out. Since then it was developped and maintained for the Spanish Royal family, at first as a retreat from the palace and later as a part of court life for plays etc. The park was opened to the general public after the revolution in 1868 (when Queen Isabel II had to flee the country) and since then has remained public property managed by city hall.

The fact that I went walking in the park twice in the same weekend should give you an idea as to how important it is to the people of Madrid. The friend I spent Friday afternoon with goes every day and walks around for about an hour with her daughter and the dog. Here's how Lola sees the park: 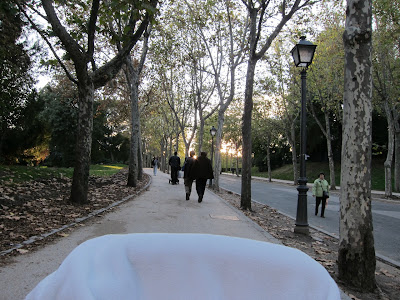 Sunday was a gloriously sunny day, didn't feel at all like almost November! And the park was full! Couples or families going for a stroll, cycling around, 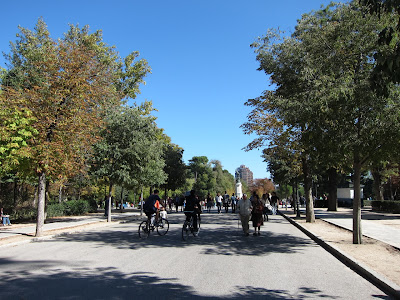 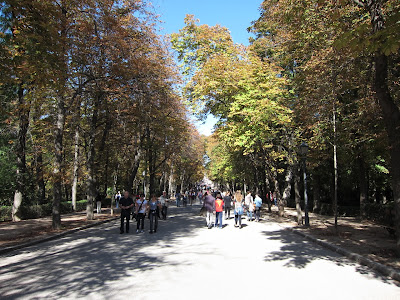 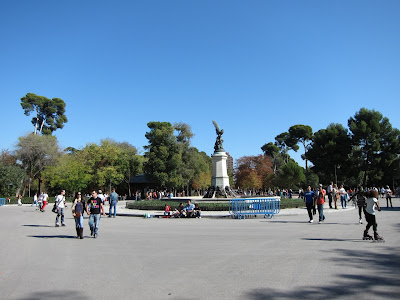 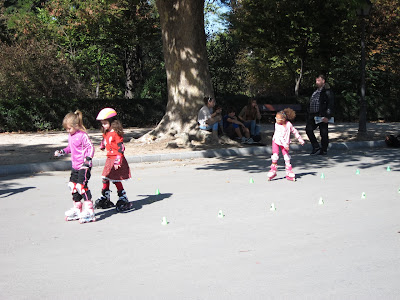 enjoying the trees and streams... 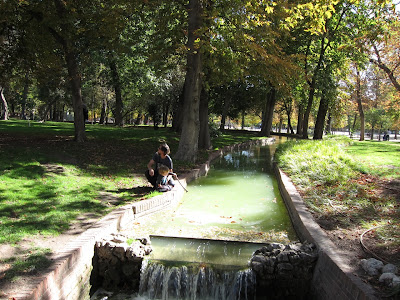 We walked through the park until we reached the "Estanque Grande", the large "pond" (for lack of a better name" that is at the heart of the park and fed by water from numerous streams like the one above. Once used to host mock nautical battles, now it's favoured by lovers or families to go and cruise around on little rowboats. 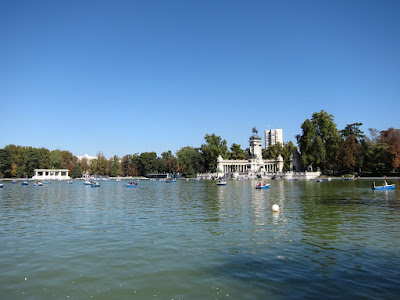 Our friends were waiting for us at the other end of the pond, under the monument to King Alfonso XII, an equestrian statue surrounded by a semi-circular colonnade. 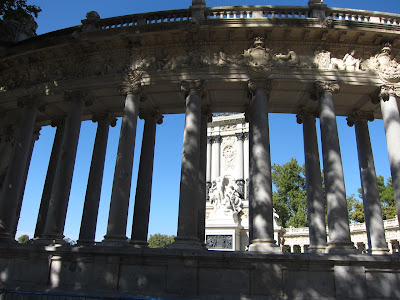 We hung out there for a while on the steps, enjoying the chance to catch up and chat in the sun... 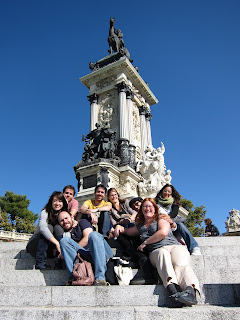 or just look out at the people in the boats or admire the details of the fountains. 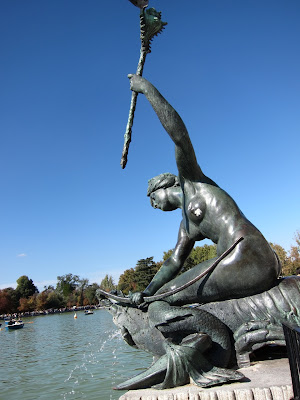 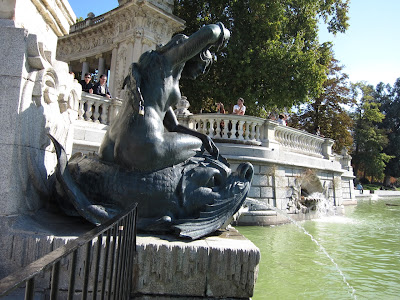 I'd been to this park many times as a child (each summer we came to Spain), and yet this "duck pond" is the only thing I remembered about it! In fact, the last time I came visiting with a friend (in Jan'98) I entered from the Puerta de Alcalá entrance (north side) which is the closest to the pond, and didn't go any further. So my memories of this park were as "not such a big deal" and "why does everyone say it's so big?". Well this time I got to do quite a bit more exploring as we wandered through the woods in the direction of one of the most stunning architectural elements within the park: the Palacio de Cristal. 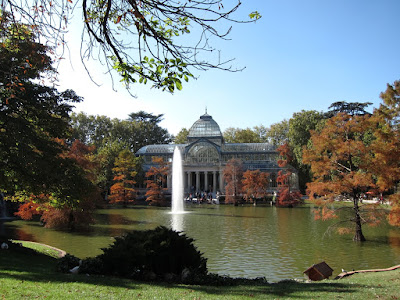 Inspired by the Crystal Palace in London, it was built (along with the artificial pond) in 1887 by architect Ricardo Velázquez Bosco for the Philippine Islands Exhibitions, it was first used to display flower species indigenous to the islands (source Wikipedia) which were still a Spanish colony at the time. 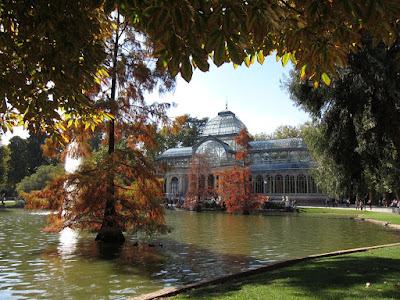 This 22m high and 54 m long steel and glass marvel is currently used for exhibitions, 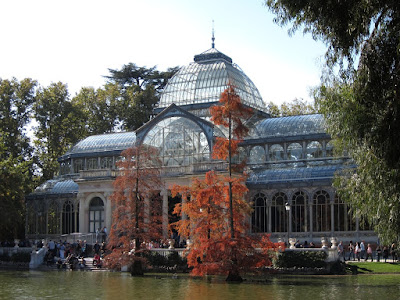 and as one was being set up we couldn't go inside and were left to admire its elegant beauty from the exterior. 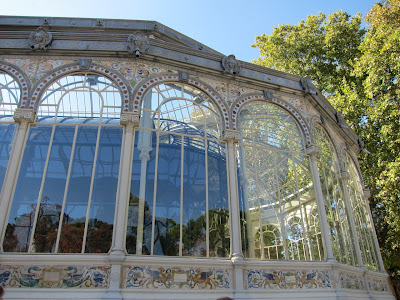 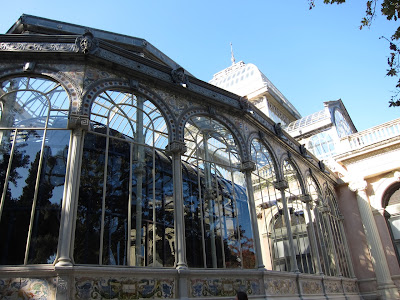 The view from the steps leading down to the pond: 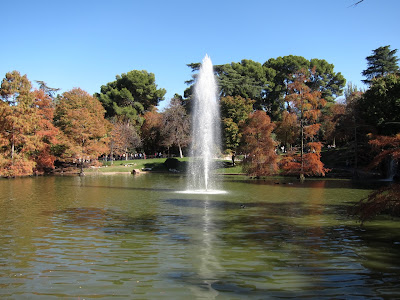 Those swamp cypresses are gorgeous aren't they? 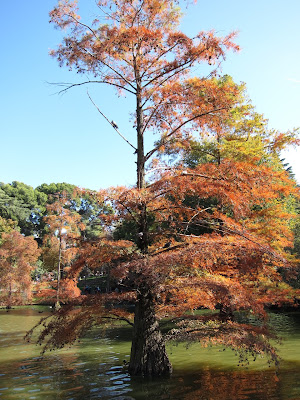 The pigeons seemed quite fond of them as well... 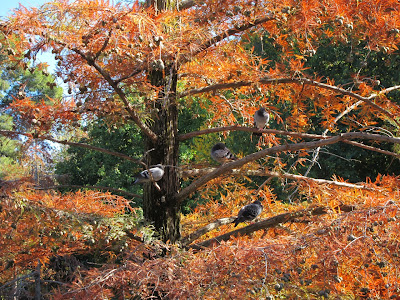 Those pigeons weren't the only critters enjoying this setting, check out these guys sunbathing on the side of the pond! 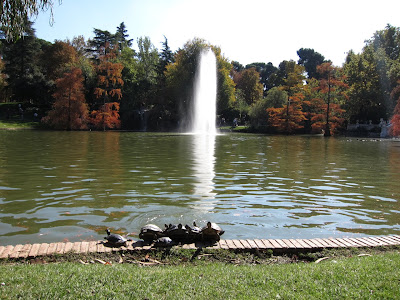 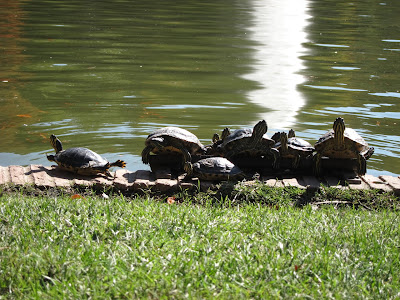 Or these elegant black swans, resting before going back in for a swim... 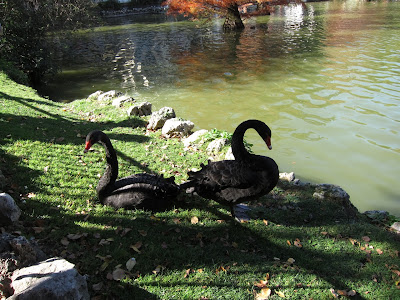 Moving around the pond a bit, we came upon a small grotto with a waterfall cascading down the front, was much cooler in there, and gave us another lovely view. 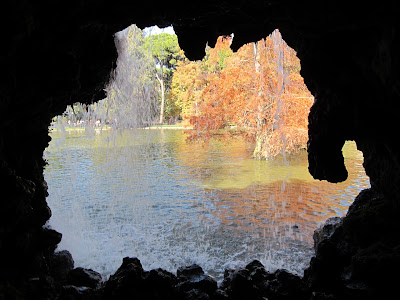 I think it's easy to understand why most people in Madrid consider this to be the loveliest spot in the Retiro! 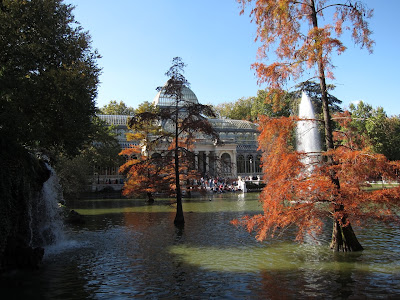 On our way out of the park, I stopped for a moment to admire what is claimed to be the only known public monument of Lucifer (a.k.a. the Devil) erected in 1877 by artist Ricardo Bellver and inspired by Milton's Paradise Lost. 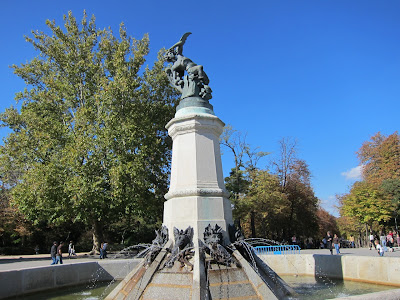 You can admire the bronze beauty of the Fallen Angel (as the monument is known: El Ángel Caído) as he falls from grace 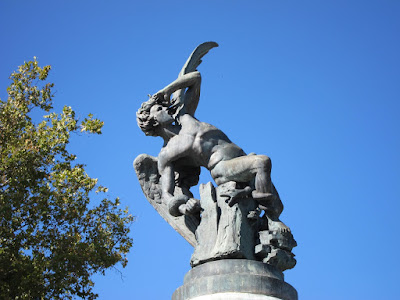 and into the arms of the demons below. 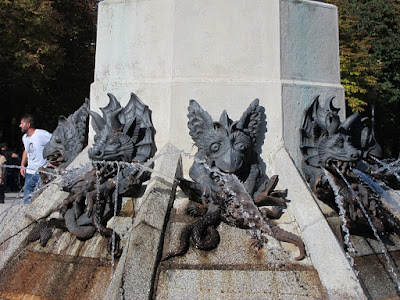 I must say, I love the look of those demons at the base!

And that was our walk in the park! I hope you enjoyed it, it's definitely worth wandering around the Retiro whenever you're in Madrid... I certainly intend to go back. Among other reasons there are a few more buildings hiding in there that I didn't get to visit! :D
Posted by CrazyCris at 7:40 PM