December 6th is Saint Nicolas, which is a very big deal for children in Belgium and the Netherlands and northern France (they get lots of presents and candy at the houses of various family members where St Nick has left them surprises!).

In Liège, an extension of this holiday is "La Saint Nicolas des étudiants", i.e. the University students' Saint Nicolas celebrations... and trust me, if anyone knows how to party hard, it's the University of Liège students! Particularly the Med students, the Vets and the Engineers... those three branches have their own brand of crazy fun! ;o)

So, in a few words, what happens in the "Saint Nicolas des étudiants"?  Starting a week or so before students don on their pimped out "tabliers" a.k.a. lab coats (the dirtier the coat, the longer they've been doing this! they're never washed!) from their "baptêmes" (now that's a crazy topic for another day, think hazing with lots of beer involved, on a voluntary basis). 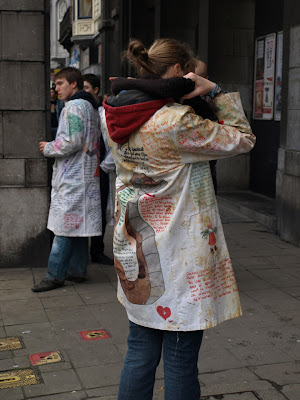 They show up at most traffic lights in the city with a beer mug in one hand and go up to drivers (at a red light obviously!) asking for a little something to quench their thirst. A Euro here, a few cents there... it all adds up in the end!


And it all adds up to the consumption of litres and litres and LITRES of beer when the party gets started! The "big night" takes place under the "chapiteau" (a big tent) where there is a final drinking contest between the winners of the recently "baptised" first year students from each school of the University (novelty: apparently this year they did it with non-alcoholic beer!). They choose the "Roi des Rois" in an "à-fond" contest ("à-fond" means "bottoms up") and basically celebrate until the sun comes up (or they run out of beer). Here's a video someone put up on YouTube of the action in the chapiteau (as usual the music's not bad!):

Next day they start showing up in front of the main University building downtown (Place du 20 Août) around noon so as to be ready to start out on the "Cortège" (a parade) at 1 p.m.


This "Cortège" is led by Saint Nicolas and his side-kick "Le Père Fouettard" (who punishes naughty children) with everyone else behind.


Sometimes there is more than one Saint Nick, here's another guy from the same year! 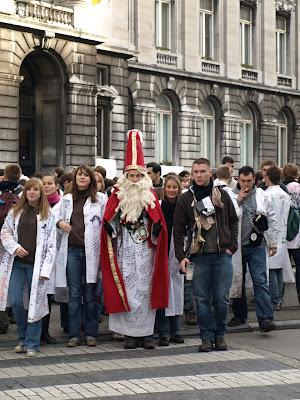 They march around town singing and so on for a couple of hours, then head back to the Place du 20 Août for a late afternoon of music and beer (live DJ). 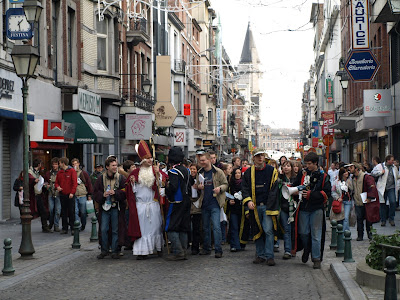 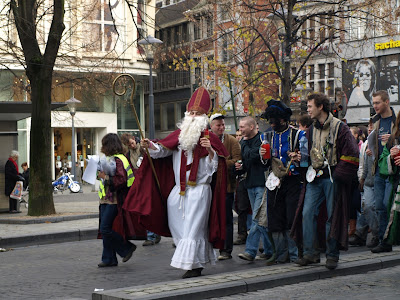 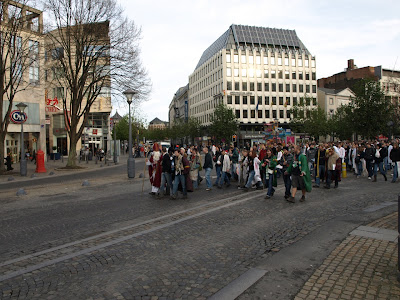 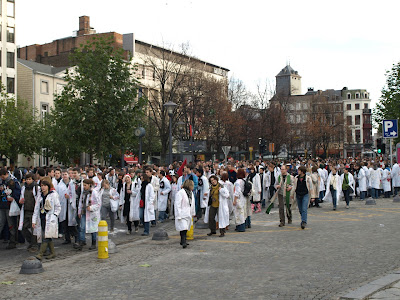 When that wraps up (usually around 8 p.m.) those who can still stand head into the "Carré" (Liège's pub neighbourhood) to continue partying into the wee morning hours. The narrow streets of the Carré are jam-packed full of people and you really don't want to know what you're wading through (whatever you do don't look down! and wear clothes you wouldn't mind throwing away the next day). Here's another video from YouTube that gives you an idea of the ambiance in the Carré:


This celebration of the Patron Saint of children and students has taken place in some form or another since the beginning of the 1900s, apparently always with copious amounts of beer (this is Belgium after all!), but at a much smaller and more "intimate" scale at the beginning. The first "cortège" was in 1928, the first collection for "l'oeuvre de la soif" (for those who are thirsty) towards the end of the 1950s and the first musical afternoon at the Place du 20 Août in 1984. From the '60s onward the holiday grew in popularity, to the point where the sighting of a "white" labcoat was no longer a rarity but quite common. Nowadays you get anywhere between 1000 - 2000 students participating in any given year! The holiday used to be the first Wednesday in December (so Tue night to Wednesday), since 2008 it's been the first Monday (so starting Sunday night). The change was in part the result of a request by city business people who don't like the student invasion in their streets during a busy shopping time of the year (no one in their right mind goes downtown when the madness is in full spree). (Dates and stuff from Wikipedia in French) Oh, and hat's off to the city officials in charge of clean-up... they do a great job the next morning!

I sadly don't have any photos of the "intense" stuff: the crowds in the bars etc (it wouldn't have captured the smells anyways) 'cause the 2 years I joined in the festivities (the bar night) were before the "digital age", in fact, the first time was last century! Plus I had a film reflex camera that was older than me! ;o) But here's a shot of the Place du 20 Août during the "concert" (DJ) I took from my window my first year in Liège (as you can see I lived really close! Those windows were vibrating with the base from the music!): 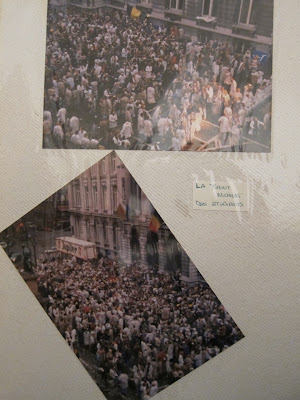 Believe me, I can't imagine you've ever lived through anything quite like this party. I kind of hate beer, so on that night it pretty much means nothing to drink for me except for water. And to enjoy the partying (and not be disgusted by the smells and the crowds) you kind of need to get drunk, so obviously NOT my favourite party! The above pics are from 2009 when I decided to make the most of a sunshiny December day and make my way downtown to watch the Cortège for the first time ever (I either never bothered to get for it before, or wouldn't go out in the rain). Here's a video a friend of mine took of the students while they're waiting around the Place du 20 Août for the Cortège to start:

Kind of crazy, don't you think? Here's another video someone else put up that kind of summarises the whole thing:

Oh, and there is a more traditional parade for the kiddies, usually the weekend before December 6th, when Saint Nicolas "officially" arrives in town to the great joy of all the children. ;o) 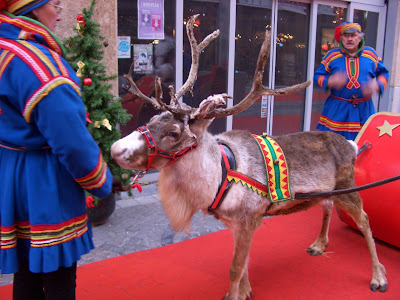 Posted by CrazyCris at 9:24 PM