So I started out this series with two Belgian Christmas Markets as those were the ones closest to me when I lived there, but now it's time to visit my favourite of them all (well, of those I've visited!): the Christmas Market in Charlemagne's old capital city: Aachen - Aix La Chapelle - Aquisgrán (pick your language!). 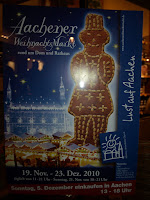 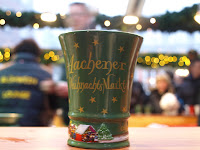 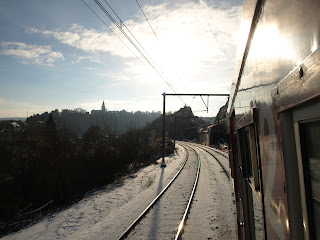 It's an easy walk from the train station to the Christmas Market area... it's only about 10-15' following the signs for the "Dom" (Cathedral), or you could just go with the flow! Litterally. Just follow the rest of the people coming out of the train station... I can pretty much guarantee you that on a December morning most of them are there for the same reason you are! They're all going here:

Aachen's Christmas Market has completely taken over the oldest part of the city, the streets surrounding the Cathedral 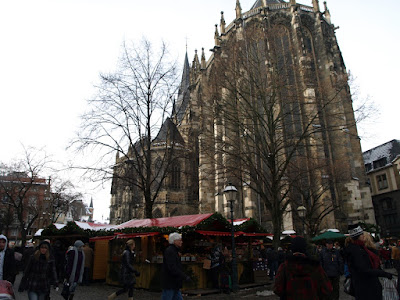 and the City Hall (where Charlemagne's Palace stood, about 1200 years ago!).

As well of course as the space between the two:

As you can see, it gets pretty crowded on a weekend! So, what is everyone doing? Well there's the Christmas shopping of course: gifts, decorations etc. But that doesn't tempt me any more as it has become quite a bit more commercial in the 10 years since I first went. I remember my first visit (Dec.2000) I was delighted by all the old-fashioned, handmade wooden toys! Plus many other handmade objects. You can still find them, but they're rarer, and of course a lot more expensive. In any case, for the people who live there (and many of the visitors), one goes for the drink and the food! 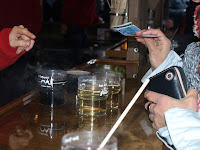 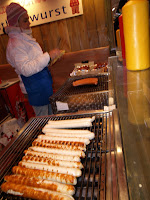 If you prefer something a bit sweeter, try one of these Christmas gingerbread cookies! 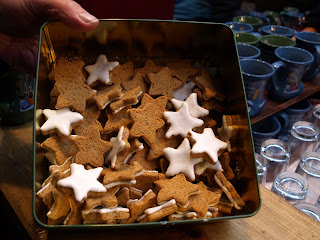 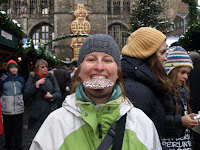 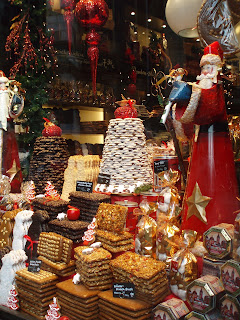 Aachen is famous for these cookies! It's the typical thing to buy and take home with you, and they are delicious!

But I really want a sausage... and some glühwein!!! Hot, spiced, mulled wine (or however you want to call it!) 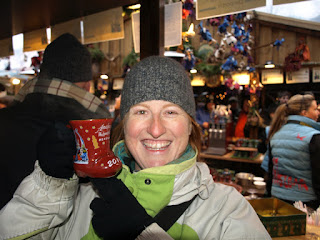 Red's not your colour? Just ask for a different one! 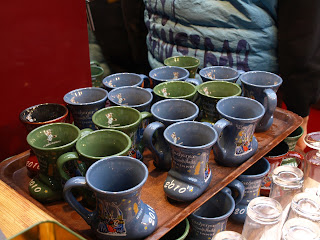 There are many places around the Market to get a drink. In fact any place that serves food serves wine etc. But then there are also (more on the outlying streets) kind of like taverns set up with hot stoves to huddle around and where people gather to have a drink and talk and enjoy the ambiance! 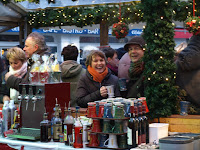 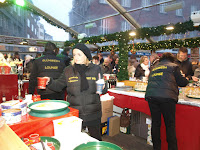 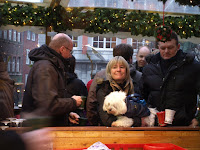 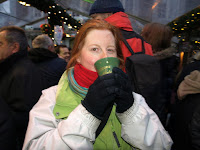 My first time in Aachen I was all excited to try out the little bit of German I remembered from my Sophomore year in High School. So I walked up to the old lady serving and asked for "drei Glühwein bitte" (3 hot wines please). She gave them to me. I asked "Wieviel kostet?" (how much does it cost?) She says "Fünf deutschmark" and then "blablablablabla" ARRRGH!!! So much for my German! "Sprechen Sie Englisch? Französische? Spanisch?" "Nein!" Oops! Thankfully a Gentleman behind me spoke both German and I don't remember what (either French or English) and he explained what she was trying to say. That it was 5 deutschmarks for the wine, but if I returned the mug I'd get 2 DM back! In other words I could keep the cool mug if I wanted since I was paying a 2 DM deposit on it! And then and there started my Glühwein mug collection. :o)

In 2007 when I went with friends visiting from Spain they also had two different mugs available that year, so of course I had to take them both back with me! ;o)

I'm going to wrap it up with a few Christmas lights ('cause everything's so much prettier with twinkling lights!), both shots taken from almost the same spot, just turning around:

And a sneak peek inside the Cathedral: 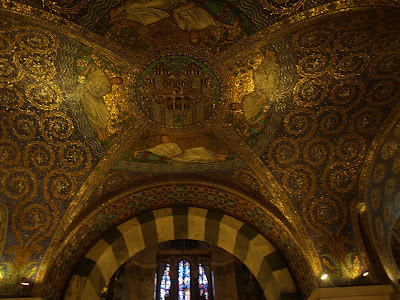 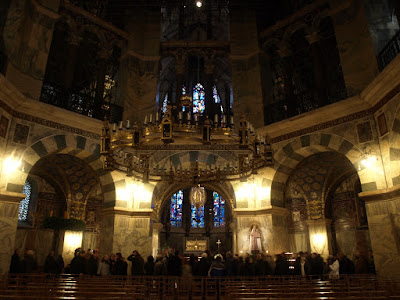 Just a look to whet your appetite for when I write another post about visiting Aachen and it's gorgeous Döm! ;o)

Note: these photos were all taken in two visits to the Aachen Christmas Market in Decembers 2007 and 2010, but not all by me! Some were taken by my friends who were with me, merci beaucoup mes amis! :o)
Posted by CrazyCris at 11:00 PM