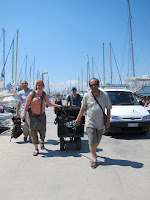 Day 1. June 2nd 2012. We left the hotel in Athens to have lunch just across the street at a little place on the beach, and from there headed over to find our two sailboats, the San Giorgio and Stressbuster, in the nearby Kalamaki Marina.

Half the gang stayed at the Stressbuster, while the rest of us loaded our bags on a trolley and followed our Skipper Vassilis to the San Giorgio where our First Mate/cook Lorella showed us around and explained where things were and how things worked on the sailboat (for example the very important lesson of flushing the sea toilets!).

We settled in, started unpacking, and headed out right after Vassilis gave us a security briefing (safety first, always!). In no time Athens was behind us and we were on our way, 31 nautical miles to go! :o)

As you can see in that shot... no sails! We did this leg with the engines. The wind was coming from the wrong direction, and using the sails would have meant frequent tacking and arriving at Poros in the middle of the night. *sigh* I'm calling this week "Saronic Sailing", but the sad truth is we didn't get to do much sailing, the winds were completely uncooperative! Someone must have forgotten the ritual sacrifice to Aeolus or Poseidon... :p Oh well. Before long Aegina was zipping by on our starboard side,


and we got to admire the islands while enjoying some yummy Greek yoghurt with honey! :o) 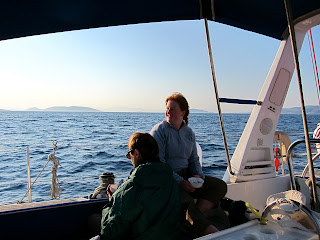 As we neared Poros Vassilis pointed out a strange little island on the horizon. He called it "Ship Rock".


He said when he was a kid he used to do quite a bit of fishing with his dad there, and it used to look just like a ship floating on the surface. But then the Greek navy (their first naval base was established on Poros in 1827) decided to use it for torpedo practice and blew most of it to smithereens! :s

Finally coming up on Poros, with a finger of the Peloponnese Peninsula behind it: 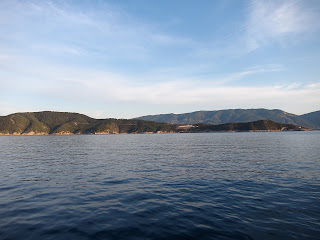 As you can see it was a beautiful day with calm seas (no one got seasick!), and everything had a lovely glow courtesy of the setting sun... 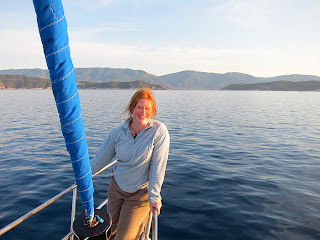 We just had to pass through that channel separating Poros from the Peninsula, admiring the lighthouse as we went around the point. 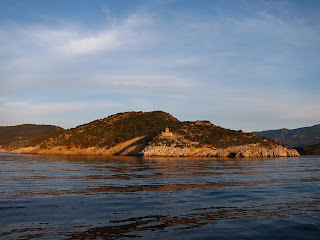 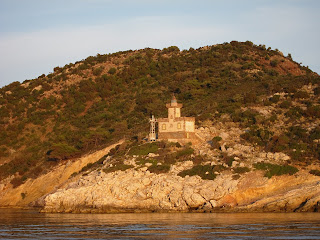 And then the town of Poros was straight ahead! (you can just make out the channel on the right separating it again from the Peninsula). 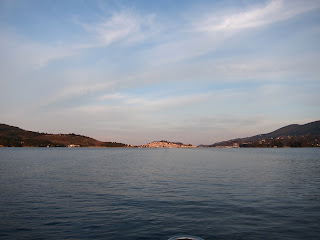 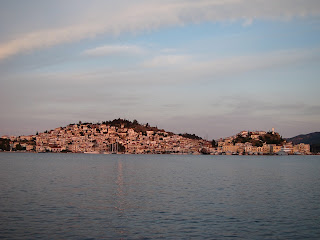 We arrived just in time to admire the sunset... and this has to be one of my favourite photos of the whole week: the Stressbuster sailing towards us, out of the sunset! :o) 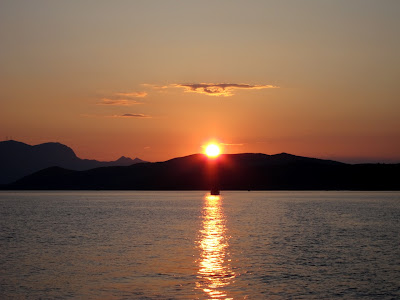 We waited as they came and docked alongside us... 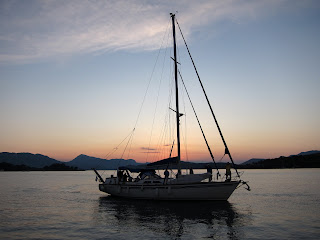 LOVE this view from the porthole in my cabin, gorgeous colours! 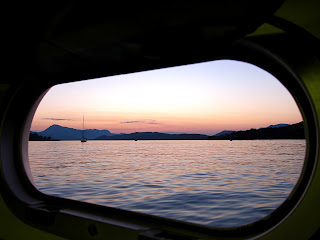 Once we were secure at dock, it was time to go find a place for dinner! We wandered through the narrow streets of the town, 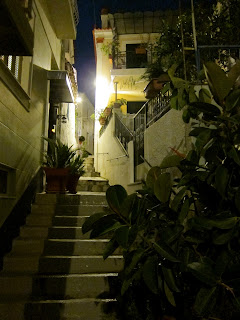 in search of a Taverna recommended to us by Kostas (skipper of the Stressbuster), and we found it! Yummm! :o) 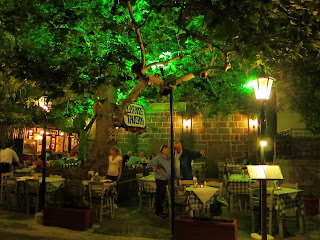 Up bright and early on Sunday morning... the others on-board still asleep and everything calm in the harbour. 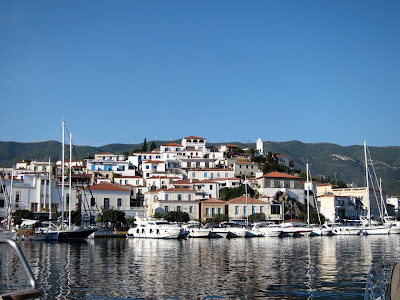 So I decided to wander around a bit before breakfast, admire the neoclassical buildings... 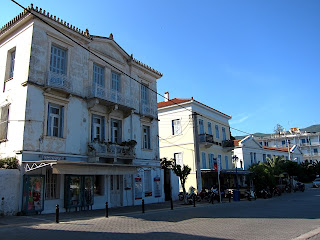 and cross over to the "other" island! 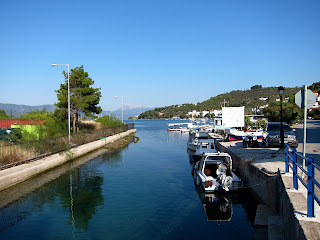 Other island? Yup! Poros is in fact two islands! Poros town is on tiny Sphairia, but if you cross this narrow channel you are on Kalavria! Lorella had told me I wouldn't even notice I was crossing to another island, and had I not been looking for the bridge she would have been right! As you can see here, it feels more like a road than a bridge, and the channel on the other side is even narrower! 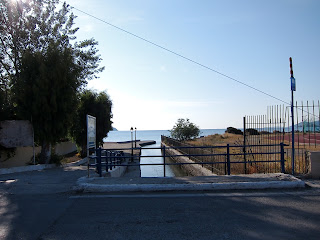 Walking to the end of the channel I looked out across the beach and the water towards the rest of Kalavria... looks pretty! 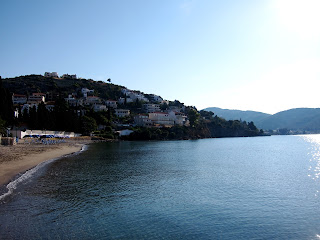 Pity we didn't have time to stay and explore... there's supposed to be a nice monastery just a short bus ride away, and up on the mountain there are ruins of an ancient temple to Poseidon (c.6th BC)! Kalaureia (ancient name of Poros) was dedicated to Poseidon (who "got it" from Apollo in exchange for Delphi). I guess I'll just have to go back! ;o)

Back to the boat for breakfast, and departure shortly thereafter. We headed out of the harbour 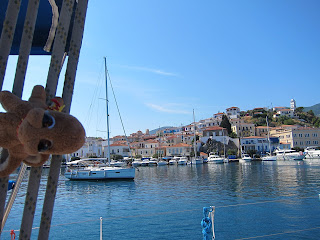 and continued round the island through the channel between the island and the Peninsula admiring the houses along the waterfront. I wished I'd had the time to go up to that clock tower! 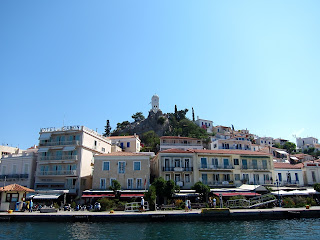 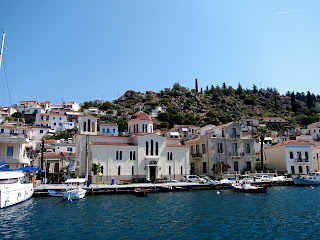 Protecting this south-eastern entrance to the channel is a small fortified island! Well, fortified once upon a time... now only ruins are left. 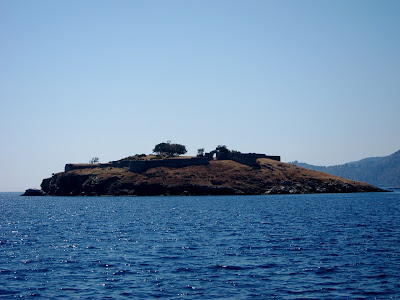 Time to say farewell to Poros (two hills = two islands), and on we go to Dokos and Spetses! But that will be for the next post. ;o) 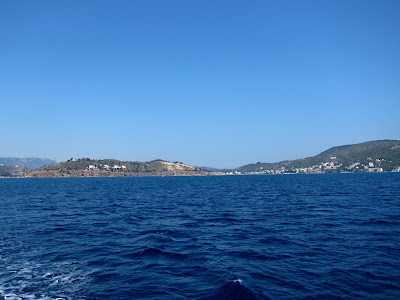 Want to know more about Poros? Try these:
http://en.wikipedia.org/wiki/Poros
http://www.poros.com.gr
Posted by CrazyCris at 9:29 PM