Sailing the Saronic Islands in Greece

How's your summer going? Mine started a bit early this year, with a lovely week of sailing around the Saronic Islands in Greece! 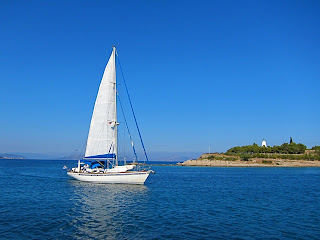 How did this come about? Just the usual bit of craziness when my family starts organising an event! My dad was looking to do something special to celebrate my parents' 40th wedding anniversary, and I suggested they go to Greece since it's something my mom has always wanted to do. So, he started digging around online, looking at options... and then thought "Hey! We could go for a sailing cruise!" There's no way you'd ever get my mom on a big cruise ship (the idea of being herded around like cattle when you land and are told you have x minutes here then back on the bus/boat/whatever is NOT her - nor my - idea of travelling), but on a sailboat -if that sailboat were to stop at islands with archaeological ruins- then yes! And my dad loves sailing (he keeps hoping someone will give him a 40ft yacht, lol!)! No sooner thought than suggested, accepted, and done! He planned a fabulous trip for them which included a week sailing and then a week to visit Athens and Crete. Only problem? Cost! Yup, chartering a sailboat ain't cheap! Well, at least not when you're just two people 'cause basically you pay a fixed rate for the boat (and captain and 1st mate/cook) and it's up to you to decided how many passengers will be on board (the boat had 4 double cabins for passengers). So my dad had to find people who would be crazy enough willing to embark on a Greek adventure! As he started contacting family and friends it looked like it would be tough to find enough people for the cost to be reasonable... then all of the sudden there was 1 person too many for the boat! Since he didn't want to go back and tell anyone "Sorry, you can't come after all", well, he just chartered a second boat! And then started convincing more people for that one! One of which included me! :o)

There were a couple of routes possible for a week's sailing, and my dad finally chose the Saronic Islands because a) they didn't involve very long distances between islands (so shorter sailing bits, good since there were people who'd never been on a sailboat before and he was worried about seasickness etc.), and b) they were historically important islands, some with interesting archaeological sites!

So, where are the Saronic Islands (sometimes called the Argo-Saronic Islands)? They're an archipelago of islands in the Saronic Gulf of the Aegean Sea, between Athens and the Peloponnese Peninsula. Of all the Greek isles, they're the ones closest to Athens, and many of them are just a couple of hours away by ferry or "Flying Dolphin". They're popular day trips from Athens, and are popular with mainland Greeks as holiday destinations in summer. Salamis (which we didn't visit) is closest to Athens, Aegina was modern Greece's first capital and in Classical times was a force to rival ancient Athens! Angistri (didn't visit) is very close to Aegina, and Poros (in reality two islands connected by a bridge) just a couple of sailing hours away. Going further south around the Peloponnese Peninsula towards the Argolic Gulf, we can find the quaint Hydra whose fleet played an important role in the war of independence against Turkey, and where you have to move around on foot or on donkey/mule/horse: no motorised vehicles allowed! A short hop away is Dokos, at present uninhabited except for lots of goats and the shepherds who tend them, but with some ruins indicating inhabitants over 3000 years ago! And finally, at the entrance to the Argolic Gulf, Spetses, another important island in the war of independence.

We sailed out of Athens to Poros on Saturday June 2nd in the afternoon, arriving in the early evening. Then on to Spetses (with a lunch stop at Dokos), back to Dokos, then Hydra. From Hydra we went to Epidauros, VERY important archaeological site on the Peloponnese Peninsula. Then Aegina (pistachio capital of Greece) and finally back to Athens on Friday June 8th. 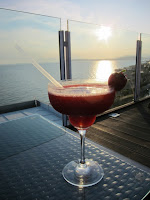 I'll be reliving this trip here on the blog this summer, with photos and videos and anecdotes, and you're welcome to join me! Tales of sailing and snorkelling and wandering around and visiting archaeological sites... So sit back, grab a daiquiri, and enjoy! I sure did! ;o)
Posted by CrazyCris at 7:54 PM