Panama. The narrow country connecting the North and South American continents. Where you can have breakfast in the big city overlooking the Pacific, and lunch on tranquil the shores of the Atlantic. 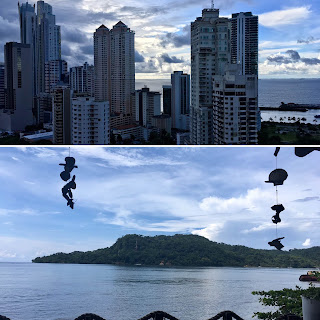 Looking over the Panama City high-rises to the Pacific Ocean over breakfast...

...Gazing out across Caribbean waters (Atlantic Ocean) during lunch. 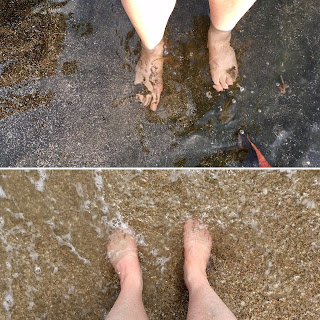 Dipping toes in the Atlantic (Caribbean) on the northern coast...

...Dipping toes in the Pacific on the southern coast of Panama.

A country whose history is closely linked to both of my parents' home countries: España & USA. And where my parents lived for almost 2 years, way back when. 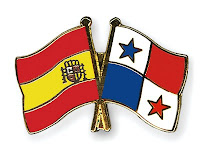 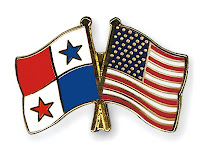 
For the past 4 and a half years now, my job has literally had me crisscrossing the globe: East Africa, West Africa, South Africa, North Africa, Central Asia, Southeast Asia, Northern Europe, Southern Europe, Central Europe... but no luck with the Americas, until September 2017 and a conference in Panama. My first time back in the country in almost 41 years!!!

Well... let's put it this way. How often does a "foreign service brat" get to go back to the place they were born? Unless that place has something to do with their family's origins... not often! People often ask me where I'm from, and when they say it as "where was I born" they're always surprised when I say Panama! And yes, having been born there, according to the country's rules, I'm officially a Panamanian! Trust me, the immigration lady at the airport pointed that out to me LOUD and clear as she chewed me out for being in the "foreigners" queue instead of the Panamanian one, despite the fact that I was entering the country with a non-Panamanian passport (since that one expired a while back... baby photos aren't good forever!, and it's bloody complicated to get a new one outside of the country!) A Panamanian who sadly is completely unfamiliar with the country of her birth, with no memories of it other than parental tales of a horrible climate (very hot & humid) and giant flying cockroaches. 😝

So you can bet I was pretty damn excited to be given the opportunity to discover the land of my birth, and although all I had was a half-day post-flight/pre-meetings and a weekend post-Conference, be sure I made the most of it (thanks to a long-time family friend who returned to retire there. Gracias Robert!!!). 😎

I managed to take in a few highly interesting places, so I have quite a bit to write about, but this will simply be the introductory post to the trip. I'll update it with links to posts as they get written, but not sure if that will be this week, month or year (I have 6 work & 2 personal trips between now and the new year!), so enjoy this teaser and check back for more from time to time!

The Panama I saw is an interesting contrast of modern big city (Panama City & the Canal), and traces of colonial history interspersed with jungle (there are of course other cities, villages, islands... which I need to go back to explore!). I don't know what I was expecting... but not an ultra-modern downtown area full of high-rises right next to the old town... But apparently that's Panama City for you! And according to my parents way different from what it was like in the '70s!

The Panama Canal is of course a must, and a lot more interesting that I thought it would be! Was almost mesmerizing to just stand at the miradores (look-outs) and watch the whole process of the big ships going through the locks... (the system of locks is what made the U.S. enterprise in Panama a success over a century ago, as opposed to the failed French attempt in the end of the 19th century, when they tried to recreate the same system they used for the Suez Canal).

From 20th & 21st century feats of engineering... to traces of colonial history: ruins of the old 17th century Spanish forts San Jeronimo and San Lorenzo at Portobelo on the Caribbean coast; and the ruins of the first city of Panama on the Pacific coast, now called "Panama Viejo", which was burned to the ground when the pirate Henry Morgan surprised the colony by crossing the isthmus via land and attacking the city in 1671... Afterwards the "new" city was built a few kilometers to the west on a peninsula that was easier to fortify and defend from all sides. That old Panama is now known as Casco Viejo, and is from where I took that photo above with the modern city in the background.  Both sites are World Heritage Sites (Panama Viejo considered a single site with Casco Viejo), and are fascinating to walk through and imagine yourself back in colonial 17th century... 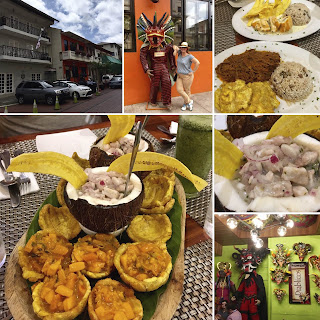 Casco Viejo is a lot more interesting to wander around in than the modern high-rise district, and the perfect place to try some of the delicious local cuisine! Wandered into an awesome restaurant called "Diablicos". The ceviche was amazing! As was the "ropa vieja" and other traditional dishes... Nothing like discovering a country through its food! 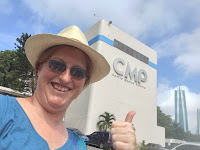 As I said, I managed to squeeze a lot in during a very short time! Hope I can write about them all sooner rather than later. But the note I want to end on... is a stop my mom insisted (over and over!) I make before I ever got on the plane: the Clinica Paitilla where I was born! Although I'm pretty sure I was born in the old building and not this new modern one, but it's a cool photo anyhow! 😉


Fun note: as a Panamanian I only had to pay $5 to get into either of the Canal sites and Panama Viejo, as opposed to approx. $15 for foreigners. Yeah! 😈 And of course I bought myself a Panama hat on my very first day! Using the excuse that my suitcase was delayed a day (courtesy of Iberia) and the sun was beating down on my head. 😝
Posted by CrazyCris at 10:49 PM