Cycling around the Marjal de Pego-Oliva in northern Alicante 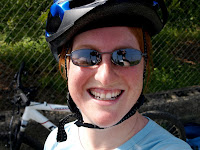 Ahhhh... what a lovely day yesterday! The sun was shining, the air was warm (HOT! bloody heatwave thanks to some crazy African wind: 35ºC!), the orange trees in bloom (AMAZING smells!!! like someone had just opened a bottle of orange blossom perfume!)... great day to go on a cycling tour of the Marjal de Pego-Oliva!

The Marjal is all that remains of an ancient lagoon that got isolated from the sea by sand dunes and then silted in thousands of years ago. It's now an ~ 1290 Ha expanse of agricultural lands (rice, oranges, figs etc.) and un-cultivated land criss-crossed by a series of canals and ditches that have been developed and maintained since the Arabs started cultivating rice here centuries ago and were also used to dry out some of the lands for orchards in the 18th century. The Marjal receives its water (necessary to be a marsh!) from the subterranean aquifer and rivers that flow in from the surrounding mountains. All of these of course depend on the rainfall in a given year (this is the part of the province that receives the highest annual rainfall). The permanent water level is usually quite near the surface, and in several places the water actually breaches the surface in the ullals or springs (some freshwater, some saltwater!).

The area was granted "Natural Park" status in 1994 thanks to the great diversity and importance of the flora and fauna found in the Marjal. This variety is possible thanks to a zonation of different water qualities -saltier near the sea, fresher further inland- and the agricultural impact (pretty much abandoned since the '60s), allowing for different biotopes to be found in the dunes, alongside the rivers, in the marshy areas, the channels (with floating and submerged aquatic vegetation!), the hills (with scrubland and some typical Mediterranean vegetation)  and the cultivated lands (very few remain in use). Like all wetlands it is of great importance for a number of migratory bird species such as egrets, cormorants, herons, storks etc. and has a number of resident bird (stilts, herons etc.) and reptile (frogs, turtles) and fish species.
So how did I end up cycling around this park I've been meaning to visit for years but never got around to it? Thanks to the wonders of internet! While searching for people to go hiking with in the province, I happened upon an ecotourism group (Aestas Ecoturismo) a month or so ago that organises "active" tours in a part of the province of Alicante that I barely know. They do hikes, walks, cycling outings and even take people to do part of the Camino de Santiago (next year perhaps!). Their website proposed a cycling tour for yesterday of this marsh. It sounded like a great opportunity for a family outing since my sister was here on a surprise visit from the U.K. (well, surprise for my parents)! Plus: cycling through a marshland = FLAT so good (none of us have spent much time on bikes in years!). :p
So just after 10 a.m. yesterday a group of a dozen or so of us were all set for 25 km through this historic marsh, hoping to admire the plant and animal life and get a bit of a workout.
As you can see in this shot, the rice hasn't been planted yet (otherwise these fields would be flooded, I'll bet the place looks radically different then!), but it looks like they're on the verge of doing so since the soil is tilled: 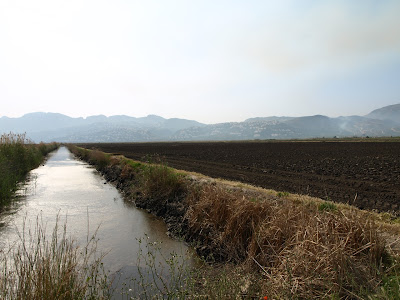 There were canals all over the place, sometimes with locks to help control the flow of water: 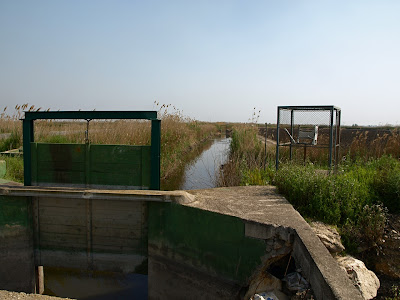 These were great for spotting birds since they usually had with a couple of white herons - garza in Spanish - and sometimes cormorants. If you click this picture bigger, you can see a heron in the centre near the right bank. I was upset I'd forgotten my zoom lens so don't have any better shots! :o( 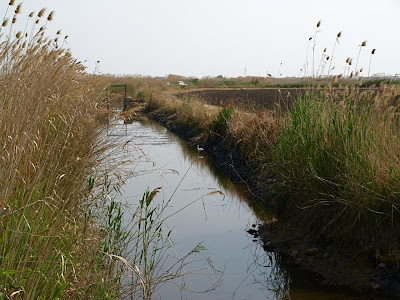 Here's a heron in flight over the rice fields: 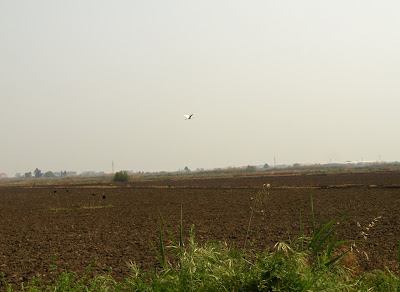 Not everything was freshly tilled brown... spots where canals ran into canals surrounded green orange orchards with their tiny white blossoms and were bordered with fig trees (yum!) or water lilies Iris pseudacorus: 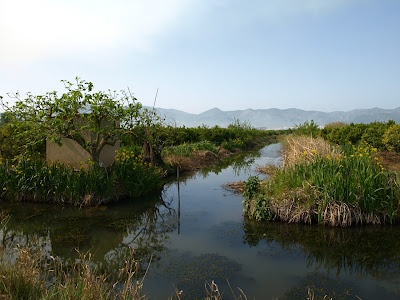 Other inhabitants of the Marjal were usually heard before they were seen... often to comical results! :p It was definitely an interesting area to be zipping around on wheels, but a flat agricultural marshland means sun beating down on you and at 35ºC... well even the breeze one generates on wheels wasn't enough! 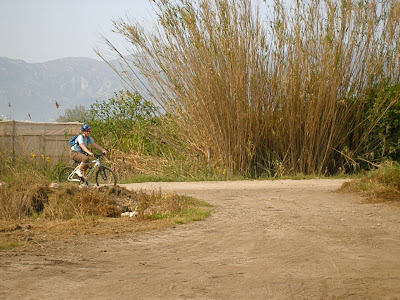 Fortunately for us there were a couple of shaded spots where we could rest and hide from the sun, like by this freshwater spring called the Ullal de Bullent where we stopped for a snack while the guide told us a bit about the Marjal and the agricultural and conservation projects: 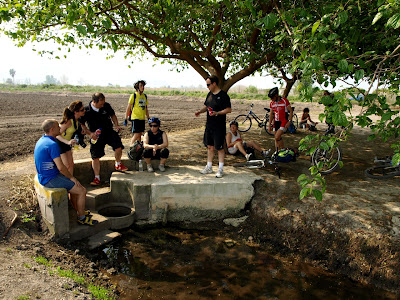 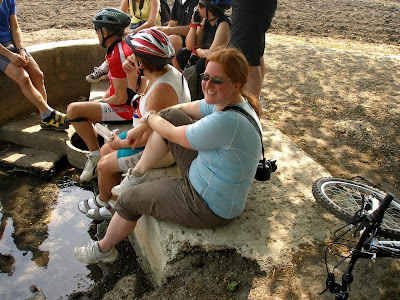 I much preferred the northern part of the Marjal, around the river Bullent where there was less agricultural impact, although the shade proved by huge fig trees was also much appreciated! 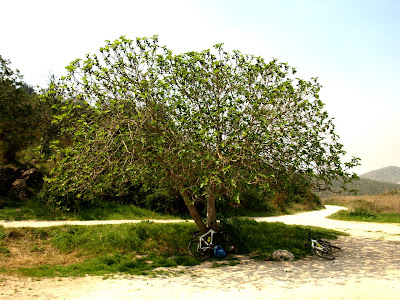 The river in itself was bubbling and lovely... 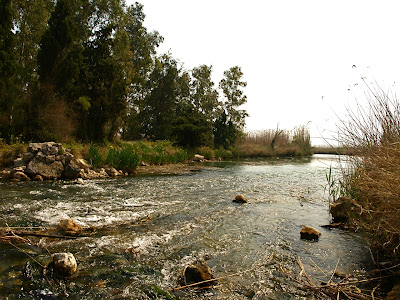 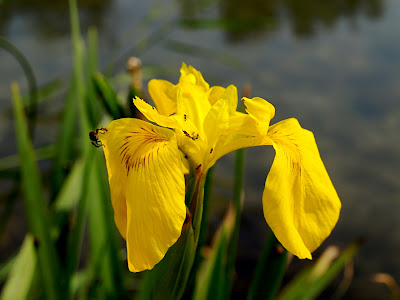 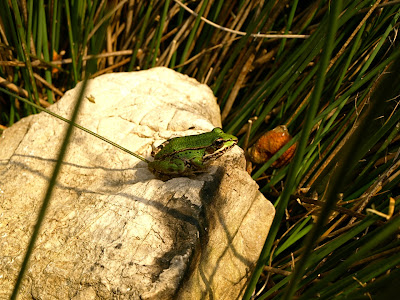 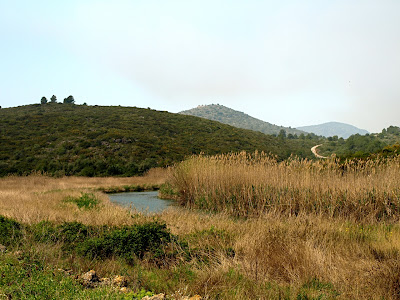 With the river Bullent on our right and the Muntanyeta Verda on our left with some typical Mediterranean "dry" vegetation that you not expect in a marsh! 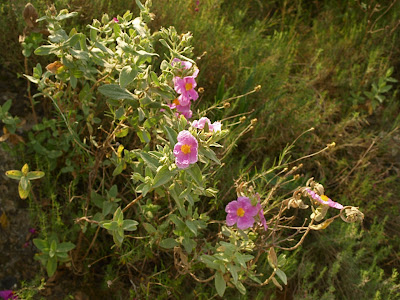 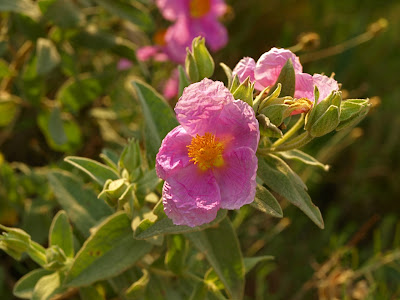 We cycled around the Muntanyeta Verda, admiring the vegetation, the canal (where you can float around in boats in the summer): 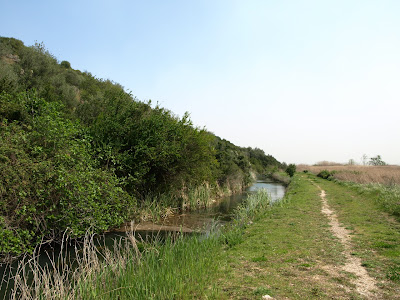 Unfortunately for me, right after this - about 15 km into the 25 km outing - we entered an area surrounded by reeds and had to cycle through on a slightly elevated walkway where we had to go through slowly and quietly hoping to see shy marsh birds. 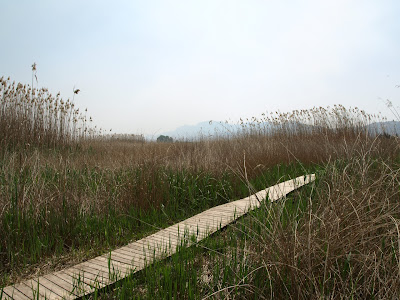 Well, going real slow on a bike makes it harder to keep your balance... and when you put your foot down to steady yourself and the walkway is too narrow, then your foot ends up going further down than you expected and you lose balance. Any guesses as to what happens next?

Yup. OUCH!!! That grin on my face is an admission of the ridiculousness of it all, and a defense mechanism from the pain radiating out of my twisted knee. Pain which actually caused me to faint and spend 30s or so out cold. Thankfully everyone was wonderful and they helped me recover and then get out to the road where the group's van picked me up and took me to E.R. Nothing broken (well, not 100% sure yet about the ligaments or meniscus), but hurt and swollen and have to keep my leg bandaged and up for a week (and frequently iced) then see a doctor again on Friday and perhaps get an MRI to make sure everything is ok. It had better be! I have no intention of spending another couple of physically inactive months like I did last year when I seriously twisted my ankle! Soon it will be too hot to go out hiking, and I refuse to miss out on the Alicante spring!!! I want to continue exploring the province!
Fortunately for me, my sis is a physiotherapist, so she gave me plenty of useful knee advice, and more importantly unwrapped my leg and then re-wrapped it after I got a decent shower this morning. Bandages can't get wet so for the rest of the week I'm stuck with bird-baths. Ugh!!! Here we are grinning over the ice on my knee and waiting to dig into a well-earned arroz abanda after the outing: 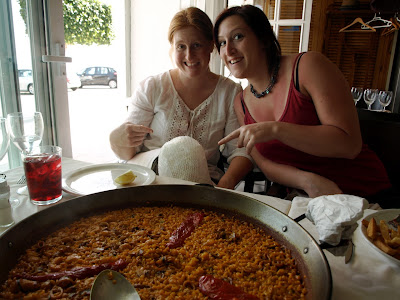