The Procesión of the Hermandad de la Santa Cruz (Brotherhood of the Holy Cross) on Holy Wednesday is definitely the most interesting and unique procession in Alicante. It generates a lot of devotion and admiration from its members and the rest of the population who show up hours in advance to find a strategic spot to watch it.
Part of what makes this procession so special is that it takes place in Alicante's oldest neighbourhood, at the foot of the castle. El Barrio de la Santa Cruz is your typical medieval mess: steep and narrow streets with lots of steps! At the top is its heart and soul, la Ermita de la Santa Cruz (small hermitage of the Holy Cross), from whence the procession begins.

Yes, I said steep, narrow, steps. So start imagining carrying one of the Pasos for a Holy Week procession through there... now imagine 3 of them. Now imagine carrying them UP and then DOWN. Why so many ups and downs? Simple, the hermitage is too small for these figures to set up there as a permanent residence, so on the morning of the procession they have to be carried up. Then in full regalia they get carried solemnly down, weaving through the old streets until they reach the Rambla and join up with the Pasos that started out from other churches in the city, all headed to the Cathedral. And after they reach the Cathedral? Well they have to go back up again! Which they do RUNNING!!! And since they can't stay up there... they'll need to be taken back down again to their permanent homes. Ouf! I'm just tired thinking of it! Walking around that neighbourhood is tiring enough without that weight... 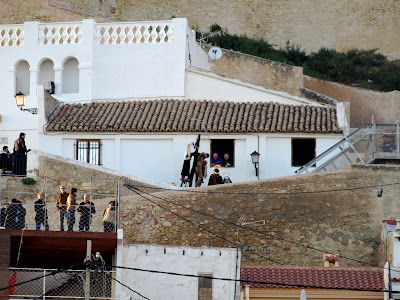 I've only been down to see the procession once (last year, 2010), in spite of having a prime spot to do so. Some family friends have a house overlooking the plaza that's just at the exit of the steep narrow streets of the Barrio, around which the procession makes its way. Each year this plaza and the adjoining streets are packed with people craning their necks to see the procession. Each year these friends host a viewing party for friends and family on their rooftop! Great spot to be able to enjoy the whole event, not so great for pictures or video once it gets dark...


Here's the first paso being carried into the Plaza del Carmen: "El Cautivo" (the Captive): 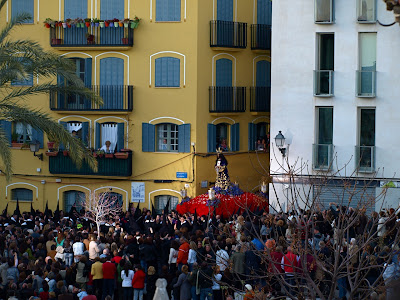 He's also called the "Cristo de Medinaceli" since that was the inspiration for this polychromed wooden sculpture by sculptor Valentín Quinto in 1995 (see more -better!- pictures here). 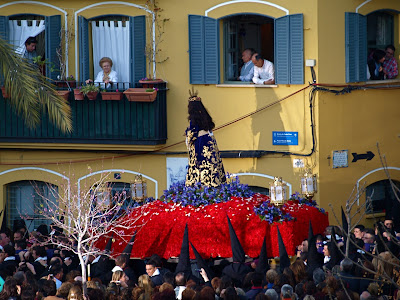 That yellow house is one of the regular rest stops for the exhausted costaleros. A good spot for switching crews (they take turns throughout the night). 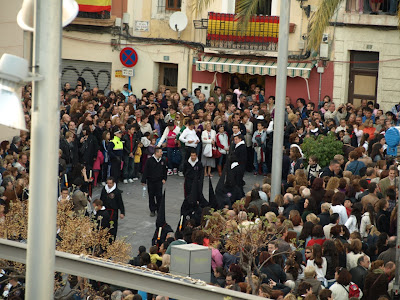 After that it's onward trying very carefully to make their way around the corner. As you can see in these next shots, it's not easy! Requires some careful manoeuvring. So imagine the complications in the much narrower streets in the upper part of the Barrio! 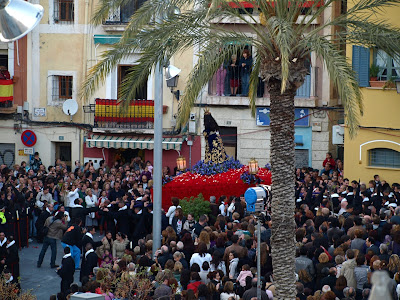 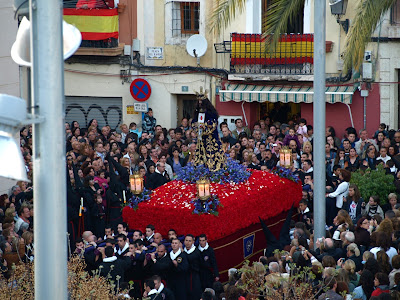 As they make their way out of the bottom of the Plaza, we get the "Cristo de la Fe" also called "el Gitano" (Christ of the Faith, or the Gypsy) entering from the top. 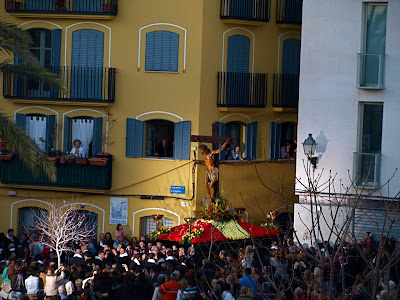 This one was sculpted from cedar in 1964 by Luis Ortega Bru from Cádiz (restored in 2004). The cross is so wide that in some of the streets it just barely fits between opposing balconies (and the faithful reach out to touch it). More great photos here. 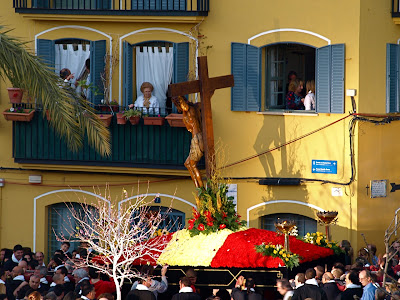 See those balconies just above the crucifix? There are people there who will usually sing a saeta when the pasos stop just beneath. I recorded one, but being so far away the song got drowned out by the noise of the crowd.

Off he goes. This profile shot of the crucifixion gives me the chills... 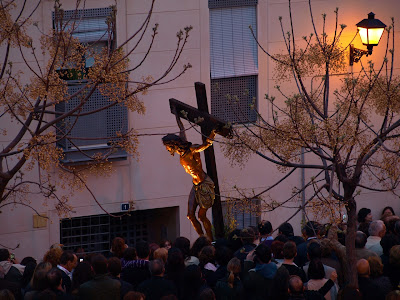 Enter the Virgin, in the figure of "la Virgen de los Dolores" (Our Lady of Sorrows), another polychromed wooden sculpture by Valentín Quinto in 1994 (more wonderful shots here). 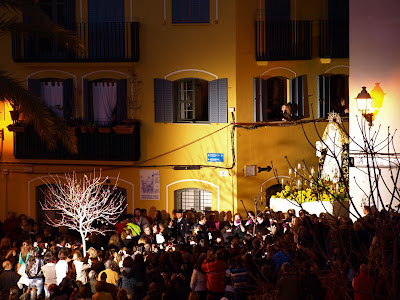 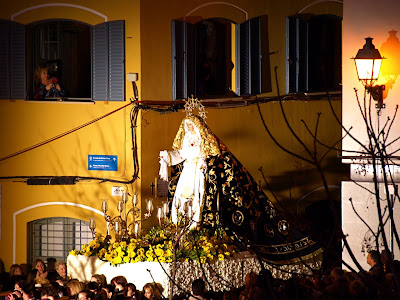 I loved the silhouettes all of these created with the shadows on the wall of the yellow house... 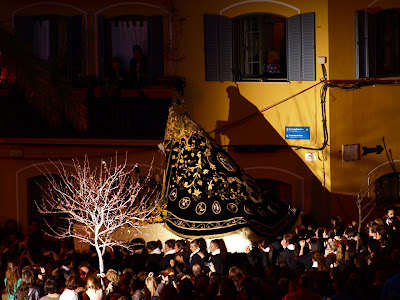 Did you notice that all the Virgin's costaleros were women? :o)

As you can see, it's getting pretty dark: 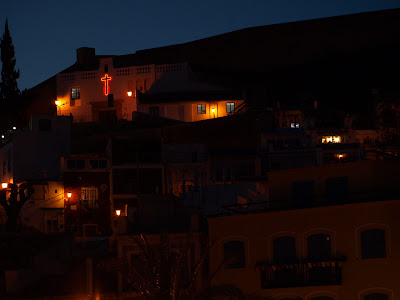 So that means it's time to light the candles on the throne and continue on around and out of the plaza. 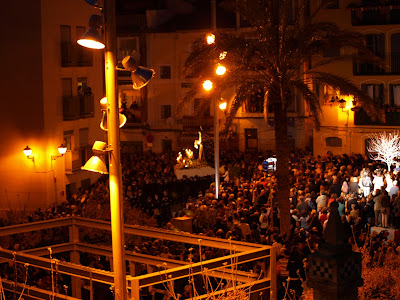 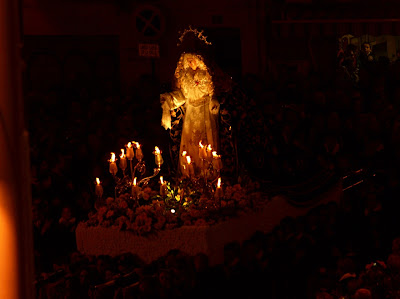 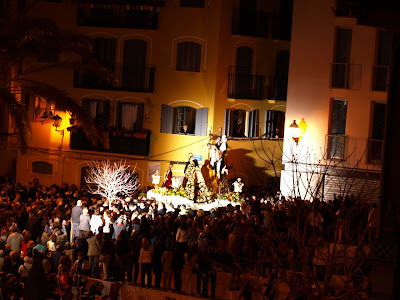 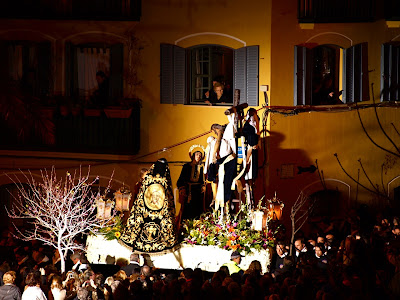 It's the oldest, and the first to enter the Barrio de la Santa Cruz before the Spanish Civil War (the original throne was destroyed when the hermitage was burnt down during the Civil War). The current ensemble weighs two tons... not an easy burden to carry through those streets! More impressive shots here (including close-ups along those steps!). 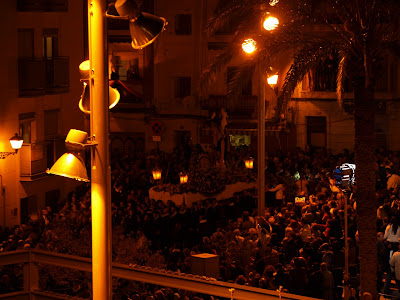 After they head out, the crowds begin to disperse. Either going home for dinner or wandering around to find another spot to see more of the processions since there are two others going on simultaneously! They'll all meet up at the top of the Rambla.


On our way out of the Barrio, we ran into the members of the Cofradía Sacramental del Cristo del Divino Amor y Virgen de la Soledad (brotherhood of Christ of the Divine Love and Virgin of Solitud) whose starting point is the Convent a bit lower down in the Barrio. 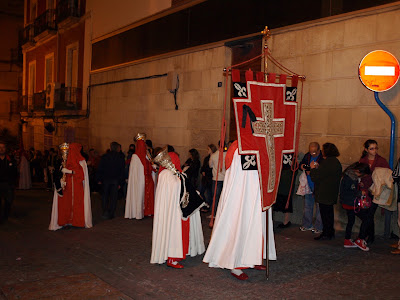 Apparently the costaleros are all students from the University's law school (at least this year according to the website). 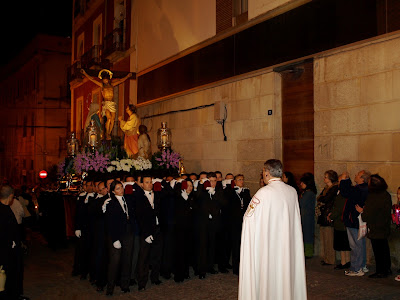 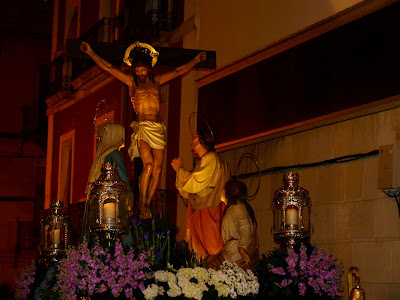 We caught up with their nazarenos as we exited the Barrio. 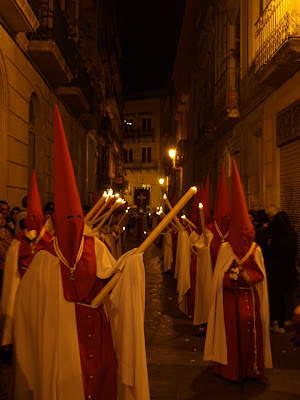 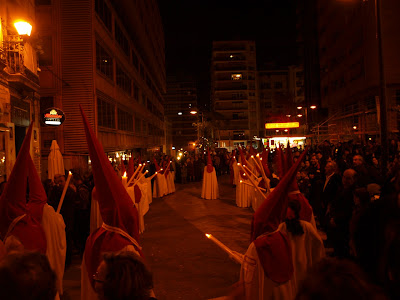 And just past them, looking down the Rambla we could see the "Descendimiento de la Cruz" waiting to join in with the rest of the processions on their way to the Cathedral. 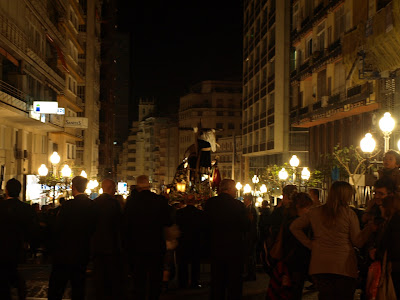 Like I said, all those photos are from last year's procession. There are some gorgeous shots from this year's at the Las Provincias (newspaper) website.

Last year I didn't stay to see the figures get carried back up to the Ermita de Santa Cruz because it would have meant waiting around for several hours. Fortunately a friend of mine did make it downtown in time for the "run" this year (I stayed home, knee still painful and iffy weather), and his girlfriend had some fun with her new cellphone's video capabilities... which they were kind enough to let me share with you! Sadly my iMovie can't seem to import them due to the format, so instead of being able to weave the best parts together in a single video, I just chose the most interesting clips to post here. Personally I was impressed! And next year I'm definitely going to try and see this part of the procession! ;o)
Here goes the departure from the Cathedral, at a run! (remember I said they run these back up the hill?)

Now they're going around the Plaza del Carmen, which is where I saw them going down last year (from a neighbouring rooftop):

Hey! It's not just the guys doing all the heavy lifting... the girls are in charge of the Virgin, remember? Well they run her up the hill too! In this first clip they're starting up after a breather (you can move the cursor straight to the 2nd half):

and here they're bringing her up the final leg, the steps up to the Ermita de la Santa Cruz (after some seriously narrow and steep streets!) (several attempts later, had to upload to YouTube as file was too big for Blogger! grrr):

I wonder if any of these have ever been dropped? Not that I know of, but still... it all seems wonderfully crazy! :o)
And here come the guys with the figure we saw leaving the Cathedral, barely an hour later (funny, it's the first time going up is faster than going down, lol!):


You can see more videos on the Hermandad's website.
Posted by CrazyCris at 11:04 PM