Tramping around and about Cadair Idris. With sheep!

guest post by Juliette Harrisson of Pop Classics, a continuation of yesterday's "Discovering Wales: much more than sheep!"
- * - * - * - * - * -
I have yet to make it up Mount Snowdon (maybe this year!) but I have done a lot of walking on Cadair Idris, the mountain we live on, which is absolutely gorgeous (and doesn’t have a mountain railway for cheaters!). There are two main routes up to the peak of Cadair Idris – the Pony Path and the Minffordd Path (the Fox’s Path has become more dangerous recently).
The first time I walked a substantial way up the mountain, we took the Minffordd Path, and the trip was somewhat spontaneous. We read all the very serious and important advice to hikers posted in the car park – and then proceeded up the mountain in summer skirts and light shoes, with one bottle of water and no food between us. It was very silly and very naughty, but in our defence, it was a lovely day in the height of summer, there were people everywhere, we all had mobile phones and we didn’t go all the way to the peak that day. Instead, we hiked up to one of the lakes in the cwms of the mountain. Even that was quite hard work for us urbanites, but somehow, whenever two of us were ready to give up, the third would gain a sudden burst of energy and pull us all along until we reached our destination – the biggest and most impressive lake.
The walk starts with a long flight of stone steps, following the river up through the wooded lower slopes. 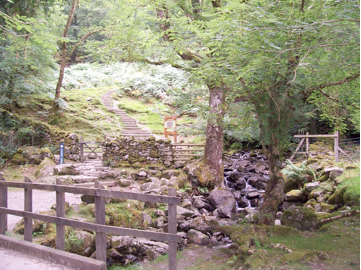 Every now and then, a gap in the trees allows you to see the valley: 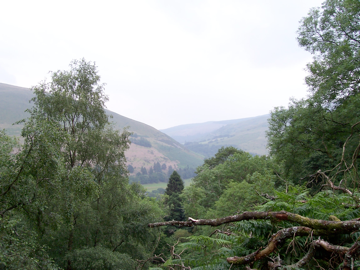 Soon, you reach the point where the trees thin out and the path opens up to go through the peaks of the mountain: 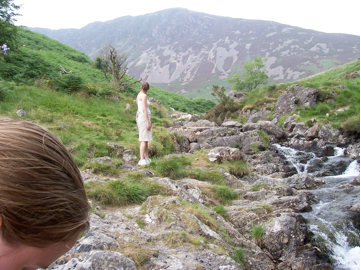 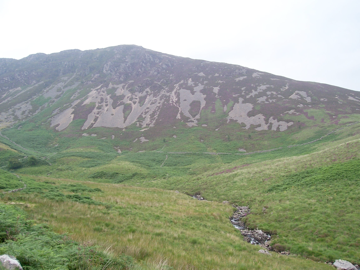 This part of the walk is a little flatter, but the ground is rougher, so it's still quite hard work. Finally, though, after a lot of effort, we reached the lake. 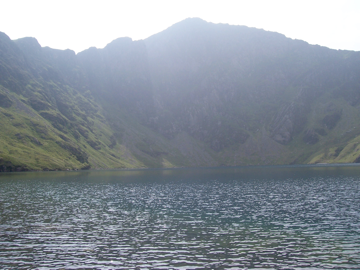 There’s an amazing atmosphere at the lake – calm and cool after a long walk, and very peaceful. Some people were camping there – it must be quite a sight to wake up to in the morning! It was also the perfect place to soothe our tired feet.

What goes up must come down, but the way down is equally beautiful. 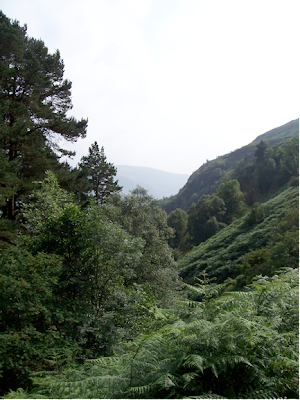 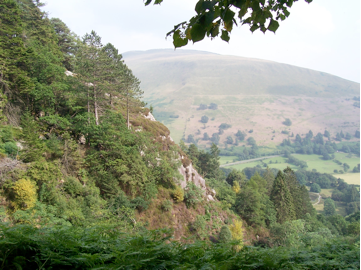 A couple of years later, and rather better prepared, we finally made it up to the peak of Cadair Idris, taking the Pony Path this time. We brought three cameras with us; one broke on the way up and one wiped everything off the memory card before we could get the pictures onto the computer, so we were left with the few photos I had taken on my mobile phone! Luckily they were of pretty decent quality, so we have some record of our trip. The walk starts with a steep climb up an open hillside. The weather wasn’t so clear that day, but we lucky enough to catch a really impressive rainbow on our way up: 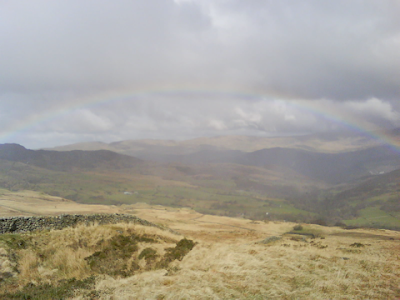 After a while, you reach a plateau and walk along a flatter part for a while, with the sea on one side and the mountain on the other. 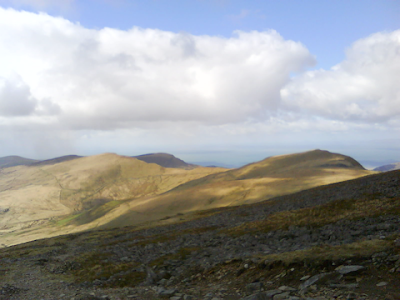 Then you start climbing again, high above another of the lakes that lie in the cwms: 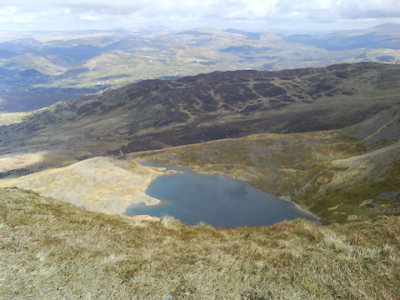 Then there’s a steeper climb – quite rocky and scrambly in places – to the top (some of this part involves scrambling over rocks near the cliff edge. I have mild vertigo, and was terrified!). 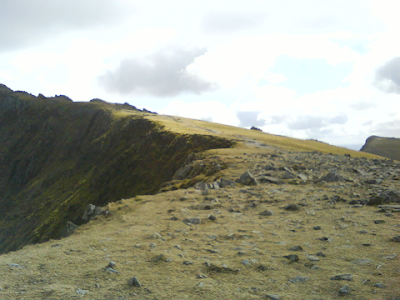 The peak is marked by a concrete post – we had better pictures but the camera swallowed them! 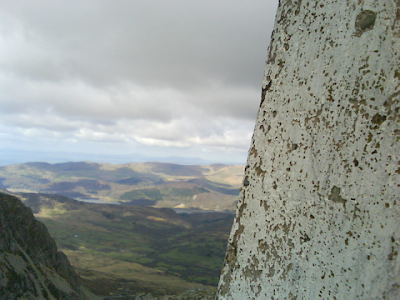 From the peak, we could see the lake we’d reached before, from much higher up this time: 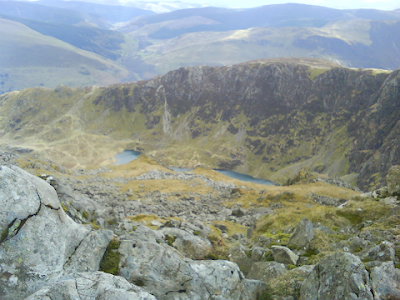 We got some lovely light on the way down, though I have to say that, since we had brought plenty of water this time, all the rushing streams had a bit of an unfortunate effect on me – luckily the car park had facilities! 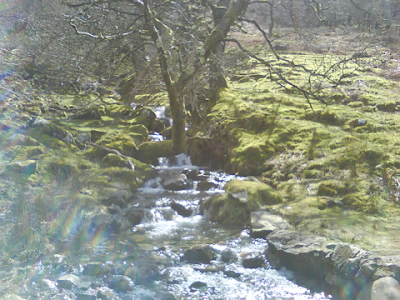 Most of the time, we don’t have time for a proper hike up the hills or to the peak, but we are lucky enough to have some lovely walking routes right on our doorstep. If we have time, we can follow the road past a waterfall and up to some of the higher slopes: 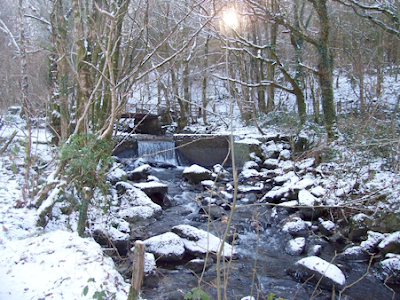 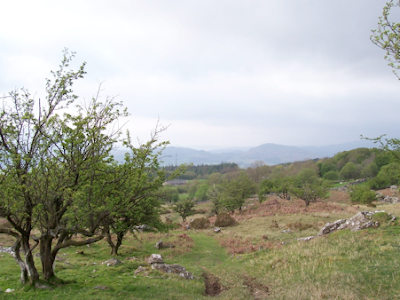 Or, we can go up through the woods to a viewpoint on the other side of the slope:

Most days, we don’t have time to go far – but this isn’t a problem, because in half-an-hour to 45 minutes we can have a refreshing walk up to the nearest sheep field and back. On the field, the trees give way to a view of the town, so we get some of the best of mountain walking without needing to put aside a day to do it! Watching the view change according to the weather is fascinating in itself, from glorious sunny days: 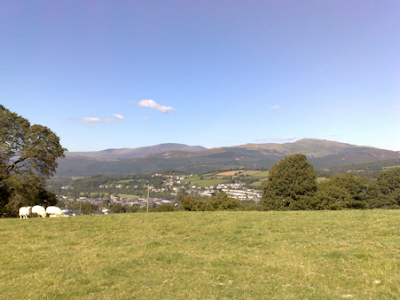 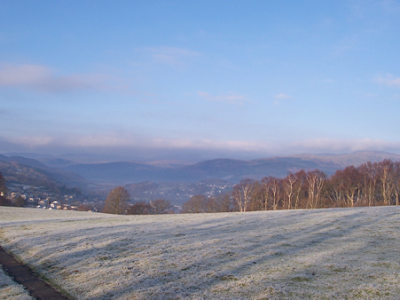 and everything in between: 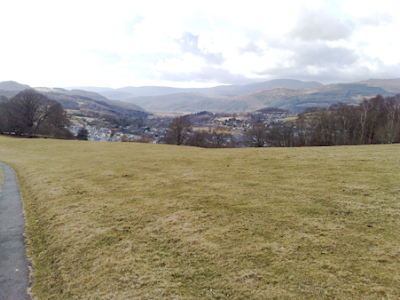 In the last year or two the winters have got harder and instead of frost, we’ve had thick, road-clogging snow: 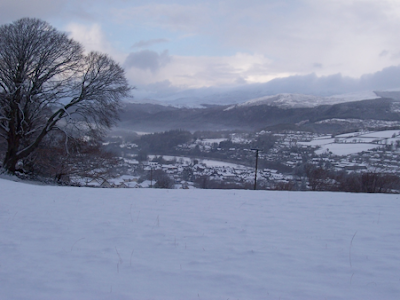 The poor sheep get awfully cold in the snow, and I ended up throwing some hay that had fallen out of their field back to them, for which they were very grateful! 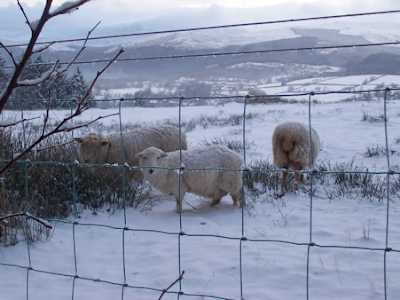 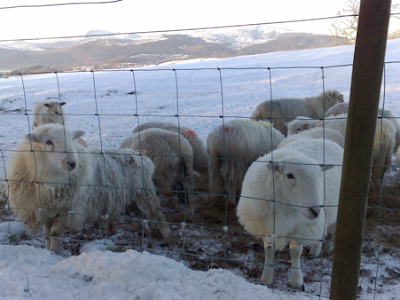 In spring, of course, we get to see all the little lambs: 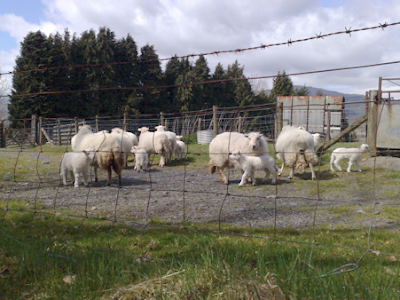 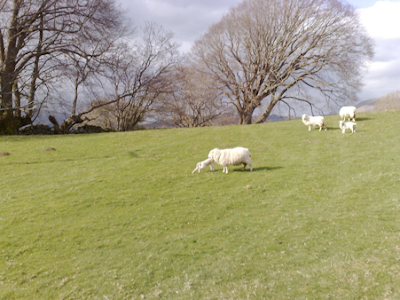 Then, as summer comes, and the lambs grow into teenagers (and before they become Sunday dinner) they can get a bit frisky: 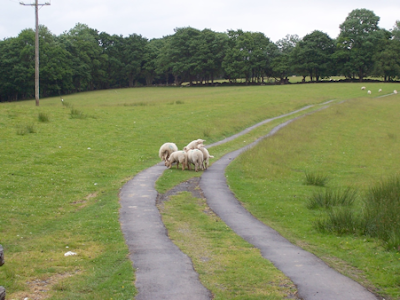 The field also offers an excellent view of the mountain peak (as long as it’s not obscured by the clouds!)
Even walking the same route every day, you never know what to expect from the mountain – I’ve seen a heron, I’ve seen dirt flying around as a mole burrows just beneath the ground, and I’ve seen somewhat more unusual field life...
But my favourite thing about it is getting to walk among the sheep each day – no matter how much we all make fun of them, there’s something very calming about just sitting in a sheep field, watching them nibble on the grass. 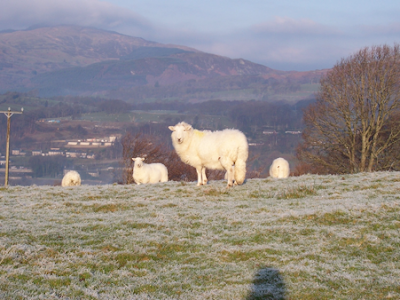 - * - * - * - * - * -
Juliette Harrisson blogs about appearances of Greek and Roman stuff in popular culture (and sometimes Egypt, the Near East and archaeology) on her blog Pop Classics. She is an associate lecturer with the Open University and an external lecturer at the University of Birmingham, and specialises in mythology, religion and Roman period literature.
Posted by CrazyCris at 1:26 AM