Discovering Wales: much more than sheep!

guest post by Juliette Harrisson from Pop Classics
- * - * - * - * - * -
Nearly five years ago, my parents moved to Snowdonia, in North Wales. When it comes to permanent living arrangements, I tend to be more of a city girl, who needs to be less than an hour and a half away from the nearest multiplex cinema, but the area they’ve moved to is absolutely beautiful and it’s wonderful to get away from the smoke and traffic and wander in the hills for a while! I lived at home for nine months of last year so I got plenty of opportunity to explore the area.


It’s an old joke in England that there’s nothing but sheep and mines in Wales, but it’s not *quite* true! In North Wales, we have impressive medieval castles:

pubs with waterfalls inside them: 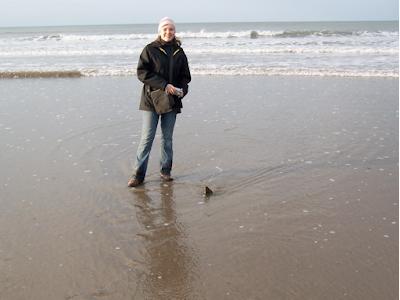 The remains of a petrified forest, submerged under the sea between Borth and Ynyslas, just north of Aberystwyth. We didn’t see the biggest trunks, as the tide was too far in, but we did see a few impressive remains (and I’ve even learned, finally, to refer to them properly as ‘petrified’, not ‘desiccated’, which is of course entirely wrong! You can read about the submerged forest here: http://www.bbc.co.uk/wales/mid/sites/coast/pages/5.shtml

However, we do also have a lot of sheep: 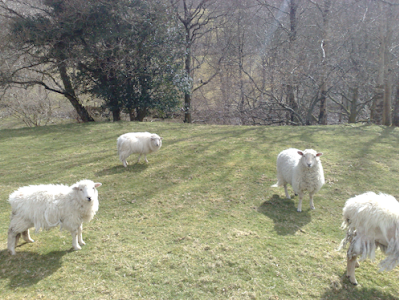 There are lots of interesting walks in the area, including the wheelchair-and-bicycle-friendly trail along the old railway line from Dolgellau to Barmouth: 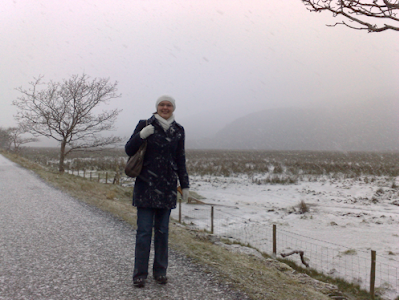 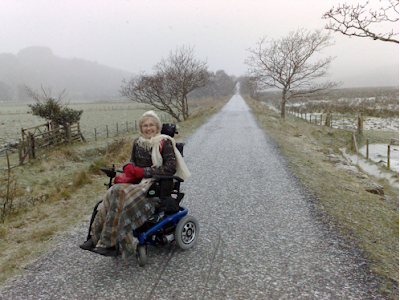 My Mum, wrapped up against the cold and unbothered by the snow! This walk is perfect for wheelchair users or parents with buggies as it’s really long, flat and the views across the estuary towards the sea – which you get to further along – are stunning.

and sometimes, if you’re lucky, you might see a llama! 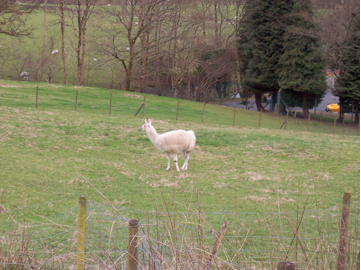 These live over the valley from us. They get moved around from time to time, so you never know if you’re going to see them or not.

Come back tomorrow for tramping adventures on the slopes of Cadair Idris, and more sheep! ;o)
- * - * - * - * - * -
Juliette Harrisson blogs about appearances of Greek and Roman stuff in popular culture (and sometimes Egypt, the Near East and archaeology) on her blog Pop Classics. She is an associate lecturer with the Open University and an external lecturer at the University of Birmingham, and specialises in mythology, religion and Roman period literature.
Posted by CrazyCris at 9:40 AM