Holy Week is a big deal in all Catholic countries, but in Spain it's a VERY big deal! 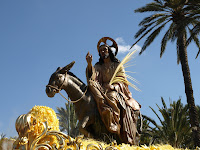 For those not familiar with Catholicism, Holy Week is the last week of Lent (i.e. 40 days before Easter). It starts on Palm Sunday (today), and ends the Saturday before Easter Sunday. Palm Sunday commemorates the joyful entrance of Jesus into Jerusalem on a donkey to celebrate Jewish Passover, while the populace rejoiced and laid down cloaks and branches on the ground in front of him. Holy Thursday commemorates the Last Supper with his twelve apostles, and Good Friday is for mourning Christ's death.


The processions organised for Holy Week in Spain have been around since the Middle Ages. Think of it as a Passion Play with statues, being represented in the streets of the towns and cities over the course of the week. In my mind it was a highly visual way of teaching an illiterate population about the Passion of Christ, and allowing the faithful a chance to participate more fully in their relgion and express their belief (and in some cases penitents asking for forgivness, or others giving thanks for blessings received). In today's increasingly secular society the number of participants decreases each year, but a significantly large portion of the population still come and either watch the processions or walk in them at the back. In some cities (like Sevilla) they have also become a major touristic draw.

The statues are called "pasos", and are sculptures (some by renowned baroque sculptors like Salzillo) in wood or plaster of Jesus or the Virgin Mary or the Disciples (or other figures).

Figures of the Virgin usually show grief for the fate of her son.

They are placed on "tronos", translated literally as thrones. These are highly decorated floats with candles and flowers and branches. Each throne represents a scene from the events that happened between Jesus' arrest and his burial.

Each of these "tronos" is set up and maintained by special brotherhoods called "hermandades" or "cofradías". Each year those chosen as "costaleros" (called that way because of the costal, a sack-like cloth they wear over their necks so it's easier to bear the weight) carry out the "tronos" from their home church and into the street to line up for the procession (following a pre-determined route in the town), frequently to the main local church or Cathedral, and sometimes back "home" again. Nowadays some are on wheels and get pushed or driven around.


The rest of the members of the brotherhoods either precede or follow the "trono" with flags, or palms, or candles or crosses. They wear robes particular to each brotherhood, and some are "Nazarenos" (as in Jesus the Nazarene since he was from Nazareth) and wear the famous conical hats called "capirotes".


The "magdalenas" are women dressed very elegantly in black and with black "mantillas" usually walk in front of the "trono" with candles on staffs (if at night).

Music is provided by a marching band who play religious hymns, funeral marches or special music composed for the occasion. In some places the procession will stop so someone in the public can sing a "saeta" dedicated to the "paso".

Last year I wrote a very detailed post about Palm Sunday in the neighbouring city of Elche which I have imported to this blog. This year I returned to Elche but couldn't stay long, but on the way home ended up seeing some of the celebrations in Alicante as well! I'm going to try and get to as many processions as possible (as my schedule and injured knee will allow) this week so I can share the experience here. Only problem is, most of these take place at night... so we'll see how good the photos are! :p

For more detailed information, the Wikipedia entry is really good! If you can read Spanish, the Spanish Wikipedia page has even more details on traditions in Spain.
Posted by CrazyCris at 11:36 PM