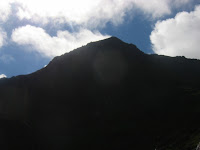 There are these special Snowdon t-shirts for sale, you know, the typical tourist stuff? Anyone who's ever been up Snowdon will know which ones I mean... they say "I climbed Snowdon!". Wish I had taken a photo of them, can't even find one online! Anyhow, you'll understand a bit more why they're something of a big deal once we reach the end of this tale.
Let's start at the beginning, after all, as July Andrews once sang it's "a very good place to start" (why do green mountains and meadows always make me think of The Sound of Music?): Yr Wyddfa a.k.a. Snowdon. The tallest peak in Wales at 1085 m above sea level, with one of the wettest climates in the U.K., and is apparently "one of the busiest mountains in Britain" (says Wikipedia) a series of facts I was vaguely aware of when I climbed it, but wasn't really conscious of what they entailed. 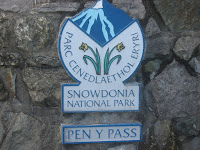 August 14th 2005. My second visit to Bangor (in North Wales) where my sister was doing a Master's Degree. During both this and the previous trip (Nov.'04) I remember making fun of the "supposed" crappy Welsh weather, saying I still hadn't seen a hint of it! Be careful what you wish for, right? Anyhow, I was all excited because we were finally going to climb Snowdon! My sister had already done it a couple of times in the past year because apparently there's not much to do when you study in Bangor other than go hiking... the girl had gotten herself in damn good shape and I was jealous! So we hopped in a car with a couple of her friends and made our way from Bangor up through Llanberis Pass to Pen-y-Pass.


Apparently there are 7 different routes that will take you up Snowdon (see here), some easier than others. Several of them start at Pen-y-Pass making it one of the most popular places (routes here) to start (parking is a nightmare, we had to leave the car pretty far down the road!). At 360 m above sea level, that means there's only 725 m left to get to the top over some 5-6 km. Supposedly 3-4h, but don't ask me how long we took (definitely longer than that!), I'm having enough trouble remembering the details as it is! :p

Of the three options we had from Pen-y-Pass, the Pyg track was the one chosen because of the weather and probably because of my not having done much hiking in years (this one's not easy, but the others are hard! they involve scrambling and walking along ridges). So up we went. 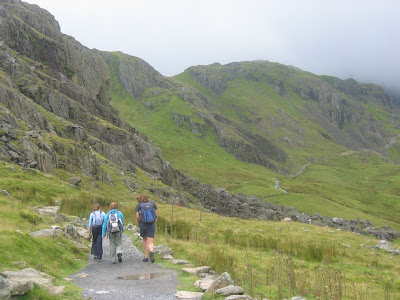 It started out pretty easy, and the clouds touching the mountain tops were fascinating. 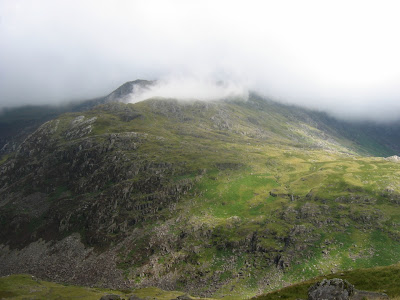 But then I started to get a bit worried when I noticed we were heading up into the clouds!!! 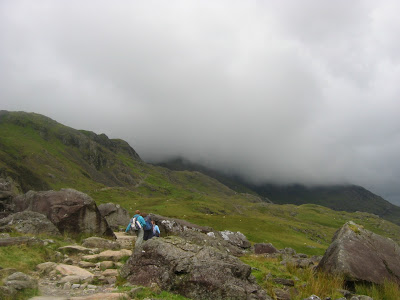 But worries are quickly forgotten when you find yourself in front of views such as these lakes in Snowdon's glacial hollows:

Just in case that first shot didn't give you a clear enough idea of how tiring this climb was, this should help:
Although I must point out that a simple laugh attack will make my face that colour... no need for me to climb a mountain! :p
And that was about where our visibility ended! A little zig up the path, then a zag... and voilà! We were in the clouds!

Once we made it up that last killer climb, it was a smooth slope for the rest of the way. Quite restful. But wait! What's that noise I hear? It can't be... 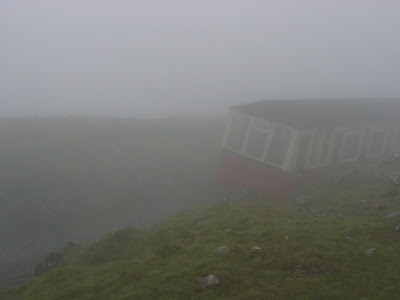 They say that on a clear day you can see 4 countries (Ireland, Scotland, Wales and England), but in this pea soup? Pffffft! Could barely see in front of my nose! Anyhow, with all the crowds up there (popular hike + train), the café was packed, and it was too chilly and damp to linger around for the skies to maybe clear up, so we quickly ate our sandwiches using a ledge as a windbreak and then headed on back down. 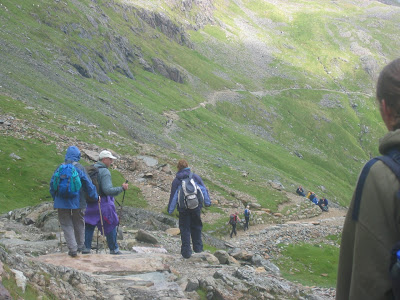 Of course, the moment we were down the steepest part, the skies began to clear up and the ridges (Snowdon is like a starfish with six arms) just appeared out of nowhere! Must be some hiker's variant on Murphy's Law. grrr... 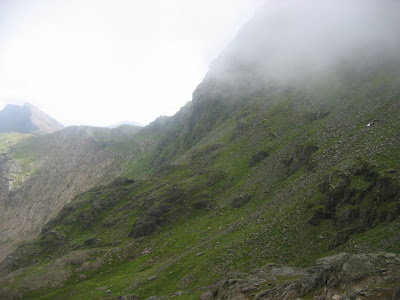 Oh well. At least that meant sunshine and lovelier views on the way down!
Sunshine + warmth + beautiful blue lake = perfect spot for a tea break!!! :o)
I thought this meant we'd just stop for a snack and enjoy the sun.... but nope! One of my sister's friends had packed all the necessary ingredients for a full cream tea! Including a jam roll he had made!!! WOW! Of course, getting the water hot enough to boil up at that height and with the breeze took quite a while (we finally had tea with warm not boiling water)... 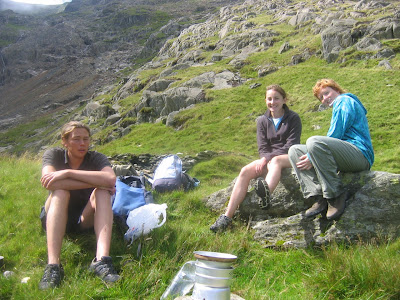 so plenty of time to admire Glaslyn Lake 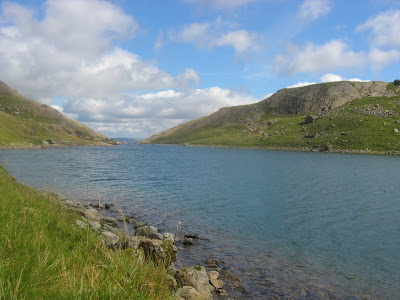 and Snowdon above it (with little waterfalls!) 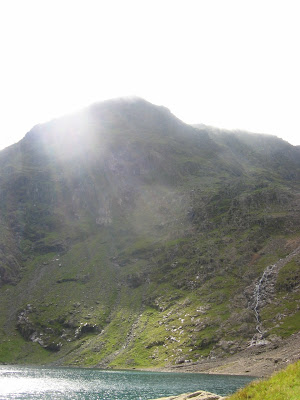 and just enjoy the sunshine! 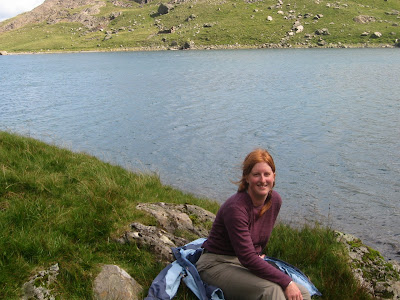 After a nice long relaxing break, it was time to head on back down the Pyg track, with Snowdon looming over our shoulders, 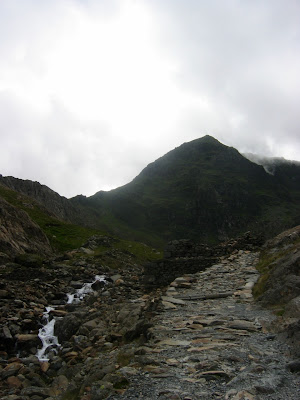 and Llyn Llydaw getting closer with each step. 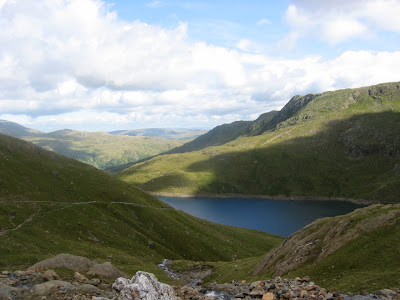 Apparently those lakes are such a unique blue (thankfully the sun came out so we could admire them!) because of residues from old victorian copper mines that used to be worked in this area. This also means no fish in them... pretty but dead! :s
Continuing on down, and since downhill is easier... plenty of time for photo-ops: 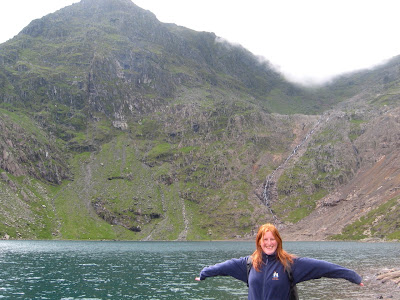 or just to goof off on the trail!
I couldn't help looking back to admire Snowdon now that it was clear of the clouds (damn Murphy!) 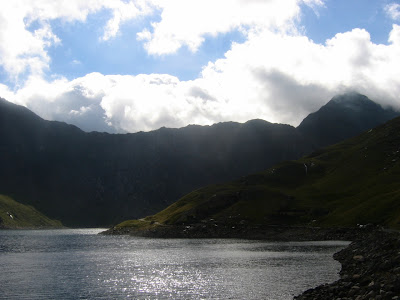 But once it was gone, the view in front had plenty to offer as well, with the gorgeous green slopes 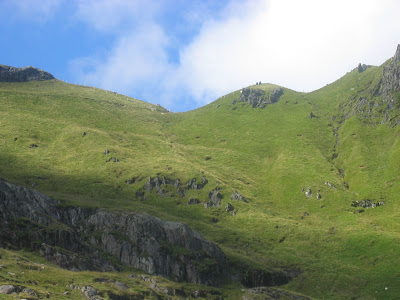 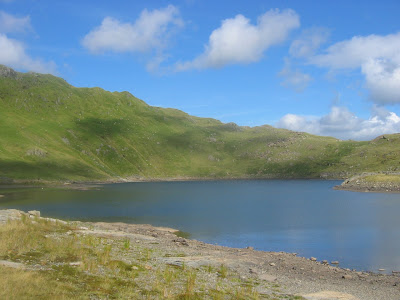 Once we got back to the car we headed into Llanberis (down that valley in the first picture of this series) for some tea and pie to recharge our batteries. 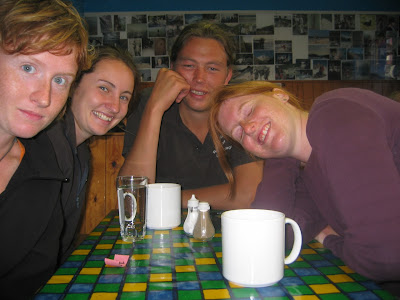 Then headed home (back to Bangor) after admiring Snowdon one last time as the sun was setting...

And voilà! So endeth my Snowdon adventure. I'm really glad Juliette from Pop Classics guest blogged about her experiences around Cadair Idris these past two days. It inspired me to take this little trip down memory lane. It was a lot of fun re-living it, I hope you enjoyed it too! I for one am convinced I need to go back and try some of those other tracks! I'd like to walk the ridges... hmmm... look out Wales, I'll be back!!! :O)
Posted by CrazyCris at 11:40 PM